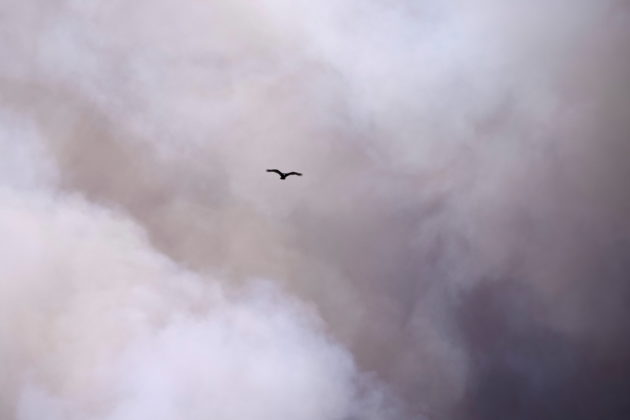 A hawk flies past the smoke from the Bond Fire wildfire near Lake Irvine in Orange County, California, U.S., December 3, 2020. REUTERS/Mike Blake

By Dan Whitcomb and Gabriella Borter

LOS ANGELES (Reuters) – Firefighters battling a blaze in a Southern California canyon made some progress toward containment but were up against more high winds and low humidity on Friday, which threatened to stoke the flames as they tore through wooded hillsides.

The Bond Fire, which had forced some 25,000 people in Orange County to evacuate, broke out around 10 p.m. on Wednesday night on the street for which it is named and quickly engulfed Silverado Canyon, egged on by strong Santa Ana winds.

“Firefighters worked through the night extinguishing hot spots, mopping up around structures and stopping the forward spread of this fire,” Captain Paul Holaday of Orange County Fire Authority said in a video posted to Twitter on Friday.

Air and ground units were focused on protecting the canyon communities of Silverado, Santiago, Williams and Modjesca on Friday, Holaday said.

In a Friday morning bulletin, the National Weather Service said a red flag warning for high gusty winds was in effect until 10 p.m. Saturday for the inland portion of Orange County, where officials said the Bond Fire still held claim to some 6,400 acres. The strongest winds were expected Friday morning.

Two firefighters involved in the effort were injured and transported to a local hospital for further treatment, the Orange County Fire Authority said on Twitter on Thursday.

The blaze was 10% contained as of Friday morning.

Woodsy Silverado Canyon, miles from Southern California’s suburban sprawl up a single winding road, is home to an eclectic mix of residents including artists, horse owners and ranchers.

Fire officials have not yet said what they believe to be the cause of the fire, although Silverado Canyon and Bond Road resident Giovanna Gibson, 60, told Reuters that neighbors believed the blaze ignited when the owners of a home without power tried to start their generator and it exploded.

Since the start of the year, wildfires have scorched more than 6,500 square miles (17,000 square km) of California land, according to the California Department of Forestry and Fire Protection.

(Reporting by Dan Whitcomb in Los Angeles and Gabriella Borter in New York; Editing by Bill Berkrot and Diane Craft)