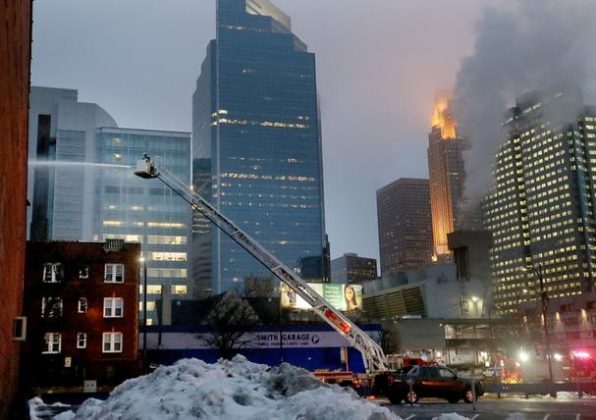 No deaths or serious injuries were reported in the four-alarm blaze. Three residents with minor injuries were taken to a hospital for evaluation, and several others were treated at the scene for smoke inhalation, officials said.

The fire erupted before dawn on the second floor of the three-story Francis Drake Hotel before spreading to the third floor and attic area of the brick building, city Fire Chief John Fruetel told reporters outside the complex.

The cause was unknown, Fruetel said, adding that he expected it would take fire crews until Thursday to fully extinguish the blaze.

Television news footage showed flames leaping through the roof amid thick smoke as firefighters poured streams of water onto the burning structure.

“I would estimate that the building is going to be a total loss,” assistant fire chief Bryan Tyner told Minnesota Public Radio News.

With temperatures hovering just above freezing, the city immediately brought in transit buses to provide emergency shelter and warmth for displaced residents, Mayor Jacob Frey told a news briefing, adding that municipal agencies were working with the American Red Cross and other authorities to provide food, longer-term shelter, clothing and other needs for the evacuees.

“These are people’s lives, this is their home. They’re concerned about everything from a wallet or a phone so they can get in touch with a loved one on Christmas, to where are their babies going to get formula,” Frey said, choking up with emotion.

The Francis Drake, which opened in 1926 as a luxury hotel later converted to residential units, provides overflow shelter space for homeless families, as well as temporary lodging for individuals who lack permanent housing in Minnesota’s largest city, municipal and county officials said.

Drake Hotel resident Jason Vandenboom said he was awakened by his wife when fire alarms sounded and he ventured out of their unit to see “a guy coming down the hallway, just pounding on the doors, saying, ‘There’s a fire, we gotta get out of here.'”

Gazing out to another wing of the building, “I saw flames shooting at least about 10, 15 feet (3, 4.5 meters) up,” he told CBS affiliate WCCO-TV. Vandenboom said he then ran back to his room and told his wife, “‘Yeah, we gotta go now.’ … It was bad.”