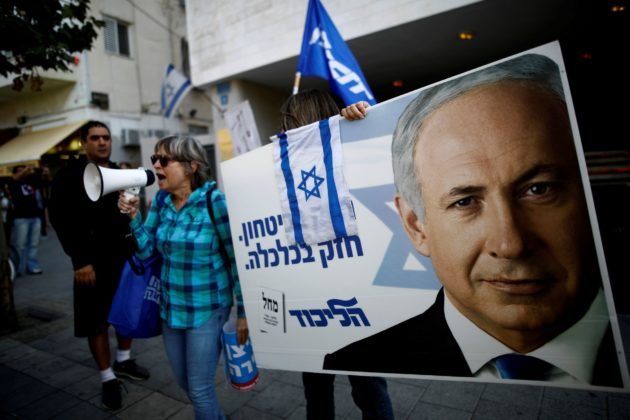 By Dan Williams and Rami Ayyub

JERUSALEM (Reuters) – Israeli Prime Minister Benjamin Netanyahu easily won a vote to keep the Likud party helm, the party said on Friday, in a boost ahead of what is likely to be a hard-fought general election in March.

Netanyahu won 72.5% of votes in Thursday’s party ballot, against 27.5% for challenger Gideon Saar, who conceded, tweeting that he would now back the incumbent “for the sake of a Likud victory in the (general) election”.

The challenge by Saar, a former education and interior minister, had added to pressures on the four-term premier, who is under indictment and fighting for political survival.

Netanyahu declared victory in a speech at Likud’s campaign headquarters near Tel Aviv, telling supporters: “The future is in our hands”.

“The sweeping decision in the primaries was a major expression of confidence in my path, in our path,” Netanyahu said, adding: “Now is the time to bring a sweeping victory to Likud and the right in the elections.”

In November, Netanyahu was charged with corruption in three criminal cases and he has twice failed to form a government in the wake of inconclusive national ballots in April and September.

Netanyahu’s rival in those elections, Benny Gantz of the Blue and White party, was also unable to form a coalition, leading to political deadlock and a third election on March 2.

Netanyahu has cast the legal case against him as a political witch-hunt by the media and an Israeli left hoping to oust him.

Gantz, who will be Netanyahu’s main challenger again in March, sought to draw a distinction between his centrist party and Likud under Netanyahu, who he said was “seeking to break down the rule of law”.

“As Likud continues to by led by a defendant in bribery, fraud and breach of trust, we will choose unity, statehood and reconciliation, leading Israel on a new path,” Gantz said on Twitter.

Though the troubles of “King Bibi”, as his fans call him, do not seem to have dented the loyalty Netanyahu commands among his supporters, some Likud members have said it is time for fresh leadership.

Netanyahu had played down Saar’s challenge, talking up his own security credentials and international prowess. Saar had argued that Likud was unlikely to regain power in March unless Netanyhu steps aside.