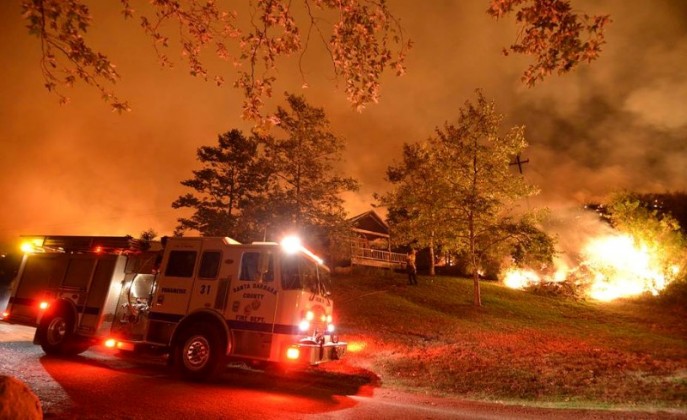 LOS ANGELES (Reuters) – A stubborn wildfire stoked by triple-digit temperatures raged for a sixth day outside Santa Barbara in coastal Southern California on Monday as crews worked to keep the blaze some have called a “sleeping giant” in check, officials said.

So far, the so-called Sherpa Fire burning in chaparral and tall grass about 20 miles (32 km) northwest of Santa Barbara has led to the evacuation of hundreds of residents from ranches and campgrounds in the hilly area.

Authorities said they expected to begin allowing homeowners and farm laborers back into those areas on Wednesday, though county health and environment officials issued an air quality warning for smoke and falling ash from the fire.

The tally of acreage burned held at nearly 8,000 acres (3,237 hectares) since late Sunday, said Jim Schwarber, a spokesman for the multi-agency team combating the blaze.

The fire, which broke out last Wednesday in the Los Padres National Forest and was 54 percent contained by Monday, has been called a sleeping giant due to the triple-digit temperatures and dense, bone-dry brush in the area that has not burned in decades, he said.

“We’re working hard to keep that giant contained so it doesn’t wake up,” Schwarber said.

So far, the blaze has destroyed only one building – a water-treatment center at a campground, he said.

But it has threatened more than 200 structures and forced officials to close the 101 Freeway near the Pacific Coast periodically as flames crept to within less than a mile of the shore.

More than 1,900 firefighters were assigned to the blaze.

“Red flag warnings” were also posted for the mountains around Los Angeles on Monday as two fires erupted in the foothills of the Angeles National Forest north of the city.

One blaze, dubbed the Reservoir Fire, had consumed some 1,500 acres by late afternoon and prompted the evacuation of about 70 homes. The second blaze a few miles away devoured about 1,000 acres, U.S. Forest Service spokeswoman Lulu Castillo said.

About 160 miles farther south, firefighters battled flames roaring through dry brush and chaparral near the Mexican border for a second day, keeping the desert community of Potrero under evacuation.

That fire, about 50 miles southeast of San Diego, had charred more than 1,900 acres and was just 5 percent contained on Monday, California fire officials reported.

Two states away, the 6-day-old Dog Head Fire in central New Mexico has charred more than 17,000 acres and was 9 percent contained after destroying 24 homes.