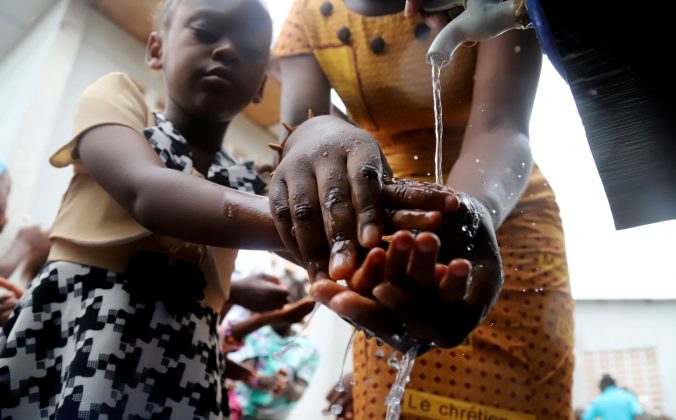 FILE PHOTO: A Congolese child washes her hands as a preventive measure against Ebola at the Church of Christ in Mbandaka, Democratic Republic of Congo May 20, 2018. REUTERS/Kenny Katombe/File Photo

LONDON, (Reuters) – A vaccination campaign aimed at beating an outbreak of Ebola in Congo began on Monday in the port city of Mbandaka, where four cases of the deadly disease have been confirmed.

Use of the VSV-EBOV shot – an experimental vaccine developed by Merck – marks a “paradigm shift” in how to fight Ebola, said the World Health Organization’s head of emergency response, and means regions with Ebola outbreaks can in future expect more than just containment of an outbreak with basic public health measures such as isolation and hygiene.

The shot is designed for use in so-called ring vaccination plans. When a new Ebola case is diagnosed, all people who might have been in recent contact with the patient are traced and vaccinated to keep the disease from spreading.

“It’s the first time in the midst of an outbreak … that we’re using this as a way to stem transmission,” WHO’s Peter Salama said in a telephone interview. “It’s an important moment that changes the way we’ve seen Ebola for 40 years.”

The same strategy was used to test Merck’s vaccine in Guinea in late 2015, towards the end of an Ebola outbreak in West Africa from 2013 to 2016. The trial results showed it was safe and gave very high levels of protection against Ebola.

Around 30 Guinean health workers who were directly involved in that 2015 vaccine trial have travelled to Congo and will help with the immunizations there, Salama said.

Ebola causes hemorrhagic fever, vomiting and diarrhea and spreads through contact with the bodily fluids of an infected person. More than 11,300 people died in the West Africa epidemic.

This latest outbreak has killed 25 people since early April, according to the WHO. It is Congo’s ninth since the disease made its first known appearance near the country’s Ebola river in the 1970s.

Cases in Mbandaka, a port city on the Congo river, have raised concern that the virus could spread downstream to the capital, Kinshasa, which has a population of 10 million.

Salama, who visited Congo after the Ebola outbreak was first reported on May 8, said up to 1,000 people – first in Mbandaka and then in Bikoro and other affected areas -could be vaccinated within the next week.

Some 7,300 doses are already in Congo, and hundreds of thousands more are available in a stockpile built up by Merck.

“If we need any more we can ship it within days,” he said. “We’re fine for vaccine supply; that’s not an issue. The issue is going to be making sure we find every contact, track them down and get them vaccinated if they agree.”

Congolese health ministry data show four cases of Ebola confirmed in Mbandaka’s Wangata neighborhood and two suspected cases. One patient has died. For every case, up to 150 contacts will be offered the vaccine.

Salama said he was particularly concerned about the “unknowns” of the outbreak – namely the potential numbers of cases in the village of Ikobo, where no roads go and even helicopters have trouble landing.

“I’m actually very worried about Ikobo because we have four new suspected cases there and it’s very, very remote. We’ve tried to land helicopters there several times, but we need the community to clear the airstrip, and they haven’t fully cleared it yet,” Salama said.

“And when you haven’t got people on the ground, it’s very hard to assess the extent of the outbreak. I’m worried there are many more cases than we’ve been able to identify so far.”