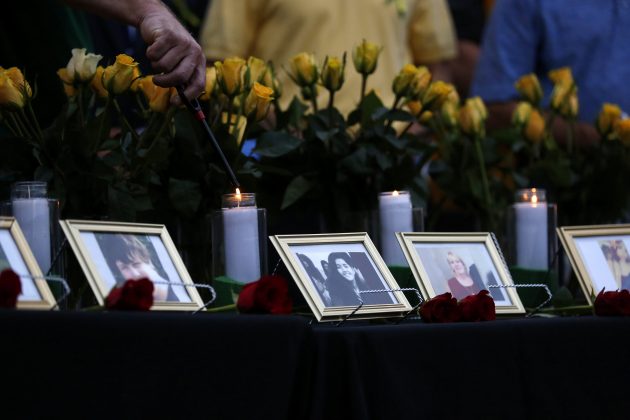 Candles are lit behind images of the victims killed in a shooting at Santa Fe High School during a vigil in League City, Texas, U.S., May 20, 2018. REUTERS/Jonathan Bachman NO RESALES. NO ARCHIVES.

SANTA FE, Texas (Reuters) – A teenage boy charged with fatally shooting eight students and two teachers during a gun rampage at a Houston-area high school had been spurned by one of his victims after making aggressive advances, her mother told a newspaper.

Sadie Rodriguez, the mother of Shana Fisher, 16, who was killed in the attack, told the Los Angeles Times that her daughter rejected four months of aggressive advances from Dimitrios Pagourtzis, 17, who is in jail accused of murdering 10 people early on Friday at the high school in Santa Fe.

Fisher finally stood up to him and embarrassed him in class, the newspaper quoted her mother as writing in a private message to the Times.

(For graphic on timeline of major mass shootings in the United States since 2007 click https://tmsnrt.rs/2LfKug6)

“A week later he opens fire on everyone he didn’t like,” she said. “Shana being the first one.”

If true, it would be the second school shooting in recent months driven by such rejection.

In March, a 17-year-old Maryland high school student used his father’s gun to fatally shoot a female student with whom he had been in a recently ended relationship.

Police said Pagourtzis confessed to Friday’s killings after he was taken into custody, but authorities have offered no motive yet for the massacre, the fourth-deadliest mass shooting at a U.S. public school in modern history.

The Santa Fe Independent School District (ISD) denied accounts from some classmates that Pagourtzis had been bullied, including by a football coach.

“Administration looked into these claims and confirmed that these reports are untrue,” it said on Saturday in a statement.

Classmates at the school, which has some 1,460 students, described Pagourtzis as a quiet loner who played on the football team. He wore a black trench coat to school in the Texas heat on Friday and opened fire with a pistol and shotgun. 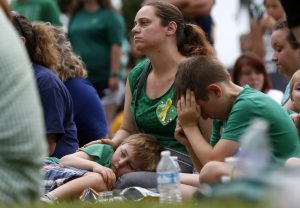 Mourners attend a vigil in memory of the victims killed in a shooting at Santa Fe High School in League City, Texas, U.S., May 20, 2018. REUTERS/Jonathan Bachman

In Santa Fe on Sunday, many churches and businesses had signs outside with messages such as “Santa Fe strong” and “Santa Fe ISD we are here for you.”

About 100 people attended an emotional service at the Aldersgate United Methodist Church. Service dogs were in a nearby hall to help console grieving victims.

Jared Black, one of the students killed, attended a youth group at the church, and many of its members embraced his mother Pam when the family arrived.

At a mosque in another Houston suburb, mourners crowded around the coffin of 17-year-old Sabika Sheikh, a Pakistani exchange student who died in the rampage.

It was the latest rampage to stoke a long-running national debate over gun ownership, three months after a student-led gun control movement emerged from a mass shooting in Parkland, Florida, which killed 17 teens and educators.

Many of those student activists have taken aim at the pro-gun National Rifle Association.

Speaking on “Fox News Sunday,” NRA President Oliver North said students should not be afraid to attend class, but that his gun-rights advocacy group did not think the solution was to limit the Second Amendment right to bear arms.

“I believe that we can make sure kids are protected without taking away the rights of law-abiding citizens,” North said, calling for metal detectors in schools and more use of the NRA’s offer to schools of free security assessments.

Pagourtzis has provided authorities little information about the shootings, his attorney, Nicholas Poehl, said, adding: “Honestly because of his emotional state, I don’t have a lot on that.”

Texas’ governor, Greg Abbott, a Republican, told reporters that Pagourtzis obtained the firearms from his father, who had likely acquired them legally.

Abbott also said Pagourtzis wanted to commit suicide, citing the suspect’s journals, but lacked the courage to do so.

Pagourtzis’ family said in a statement it was “saddened and dismayed” by the shooting and “as shocked as anyone else” by the events. The family said it was cooperating with authorities.

(Reporting by Liz Hampton; Additional reporting by Erwin Seba in Houston and Ian Simpson in Washington; Writing by Rich McKay and Daniel Wallis; Editing by Andrea Ricci and Peter Cooney)