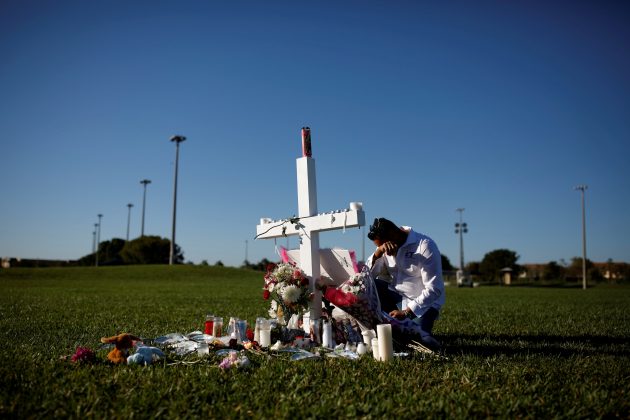 Joe Zevuloni mourns in front of a cross placed in a park to commemorate the victims of the shooting at Marjory Stoneman Douglas High School, in Parkland, Florida, U.S., February 16, 2018. REUTERS/Carlos Garcia Rawlins

FORT LAUDERDALE, Fla. (Reuters) – The Florida Senate rejected a proposal to ban assault weapons, and voted for a measure to arm some teachers, weeks after 17 people were killed in the deadliest high school shooting in U.S. history.

An amendment that would have banned assault weapons attached to a wider bill failed on Saturday in a largely party-line vote, in response to the Feb. 14 killing of 14 students and three faculty at Marjory Stoneman Douglas High School in the Fort Lauderdale suburb of Parkland.

The vote was 20-17 against the assault weapon ban, with two Republicans joining all of the senate’s 15 Democrats in support of the proposal, the Miami Herald reported.

The full bill, the Marjory Stoneman Douglas High School Public Safety Act, is expected to pass the state Senate on Monday, then go to the Florida House.

After the Senate rejected the ban, Stoneman Douglas student Jaclyn Corin tweeted, “This breaks my heart, but we will NOT let this ruin our movement. This is for the kids.”

Fellow classmate David Hogg, who has become one of the school’s leading activists on gun safety, tweeted, “Elections are going to be fun!”

Also, an amendment to remove a provision to train and arm some teachers failed.

The bill raises the minimum age to buy a rifle or a shotgun to 21 from 18 and bans the use, sale or possession of bump stocks, which were used in the Oct. 1 shooting deaths of 58 people in Las Vegas. The device effectively turns semi-automatic weapons into automatics.

The bill includes $400 million in funding for schools to address mental health issues, the Herald reported.

Nikolas Cruz, the accused 19-year-old killer who was expelled from Stoneman Douglas, had a history of run-ins with the law and school officials. The Broward County school system and sheriff’s department have been criticized for not acting on red flags on Cruz’s mental health problems and potentially violent behavior.