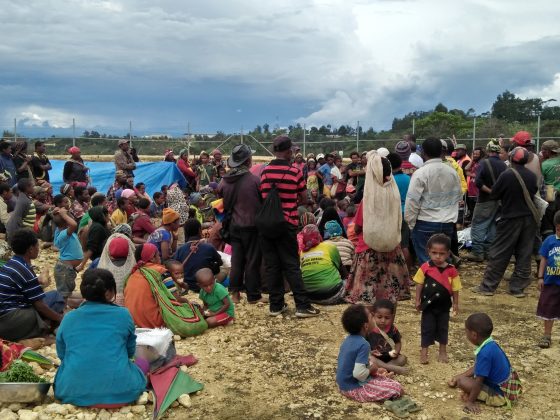 People displaced by an earthquake gather at a relief centre in the central highlands of Papua New Guinea March 1, 2018. Milton Kwaipo/Caritas Australia/Handout via REUTERS

By Sonali Paul and Charlotte Greenfield

Two aftershocks above magnitude 5 and one of magnitude 6.7 hit the mountainous Southern Highlands, about 600 km (370 miles) northwest of the capital Port Moresby, with the constant shaking driving people from their homes to makeshift shelters for fear of landslides.

There were no immediate reports of damage from the magnitude 6.7 tremor, which struck shortly after midnight, Wednesday morning, local time.

Local media outlets on Tuesday reported the death toll had grown to 75, after government officials said previously that 55 people had been killed.

James Komengi, a United Church project officer, speaking from Tari, the capital of quake-affected Hela province, said his church’s assessment and response center had counted up to 67 deaths in that province alone.

“Mothers and children are so traumatized. Even my own children are refusing to sleep in our house. Every little movement scares them,” said Komengi.

Concerns were also growing about access to safe drinking water after the shaking destroyed many water tanks, while land slips had poured mud into natural water sources.

Local hospitals had seen a number of people with stomach conditions, but it was not yet confirmed whether these were due to contaminated water, he added.

Aid agencies were struggling to get aid by helicopter to all of the nearly 150,000 people who remained in urgent need of emergency supplies.

“The logistics are still a massive problem,” said Anna Bryan, an aid worker for CARE Australia based in the capital Port Moresby.

Australia, New Zealand and the Red Cross have all pledged aid, although reaching the remote area has proved difficult as forbidding terrain and bad weather, as well as damaged roads and runways, have delayed aid efforts.

“Right now the main challenge in the affected areas is accessibility by roads. There are big cracks along the roads and even roads completely cut off. So that’s making it quite difficult to get water, food and medicine to the remote areas,” said Milton Kwaipo, Caritas Australia’s disaster response and management officer in Papua New Guinea.

The quake has also been felt on global gas markets, with ExxonMobil Corp declaring force majeure on exports from Papua New Guinea, according to an industry source, pushing up Asian spot liquefied natural gas (LNG) prices.

The company declined to comment on the force majeure, but said it would take about 8 weeks to restore production.

(Reporting by Sonali Paul in MELBOURNE, Charlotte Greenfield in WELLINGTON and Byron Kaye in SYDNEY; editing by Richard Pullin and Kevin Liffey)