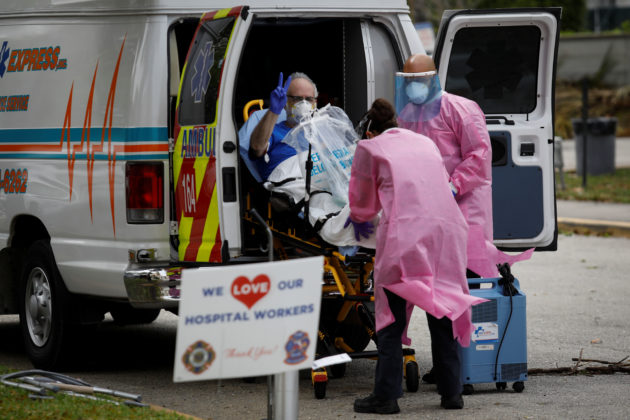 By Maria Caspani and Doina Chiacu

WASHINGTON (Reuters) – Florida Governor Ron DeSantis on Wednesday was preparing to unveil his plan for loosening restrictions on business activity in one of the most populous states in the United States as data showed the economy contracted 4.8% in the first three months due to the shutdowns aimed at battling the coronavirus.

Commerce Department data showed the economy shrank at its sharpest pace since the Great Recession due to the stringent measures to slow the spread of the novel coronavirus, ending the longest expansion in U.S. history.

Economists generally define a recession as at least two months of negative growth in a row.

“The economy is in free fall, we could be approaching something much worse than a deep recession,” said Sung Won Sohn, a business economics professor at Loyola Marymount University in Los Angeles. “It’s premature to talk about a recovery at this moment, we are going to be seeing a lot of bankruptcies for small and medium sized businesses.”

With millions unemployed, about a dozen states have been forging ahead to restart shuttered commerce without being ready to put in place the large-scale virus testing or means to trace close contacts of newly infected individuals.

Public health experts have urged caution, saying that a premature rollback of social-distancing policies could trigger a resurgence of infections.

In Florida, the largest state so far to contemplate re-opening, DeSantis is expected to announce a “phase one” loosening of restrictions a day after it reported a record-high 83 deaths and more than 700 new infections from the previous 24 hours on Tuesday. Despite being spared the worst of the pandemic, the state has so far tallied 32,846 cases of COVID-19, the disease caused by the virus, including 1,171 deaths.

U.S. deaths from the novel coronavirus was approaching 60,000 on Wednesday, and cases crossed the 1 million mark. The death toll has already surpassed the number of American lives lost in the Vietnam War, and the outbreak will soon be deadlier than any flu season since 1967, according to a Reuters tally.

“I think you’ll see by June, a lot of the country should be back to normal and the hope is is that by July, the country is really rocking again,” he told Fox News.

He said the White House would begin another round of calls on Wednesday with all the governors to ask what additional supplies they need and what their two-month plan is.

Some businesses in Tennessee were allowed to reopen on Wednesday following an executive order issued by Governor Bill Lee to restart the state’s economy.

Some restaurants will be able to serve food to customers seated at tables, granted they observe state-mandated guidelines, while close-contact personal service businesses like barber shops, salons and spas will remain closed for now.

In California, Governor Gavin Newsom said curbside retail, manufacturing and other “lower-risk workplaces” should reopen within weeks as testing and contact-tracing improve.

Health experts have stressed the importance of testing and contact tracing to prevent a resurgence of the virus, but a nationwide strategy remains elusive and Trump has said the testing onus rests with single states.