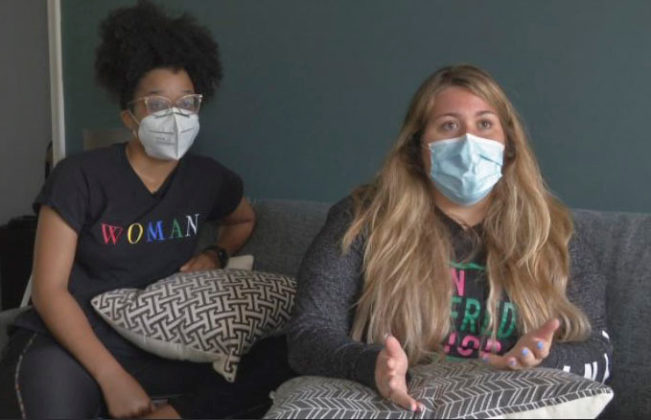 Kerrigan Williams, 22 (left) and Jacqueline LaBayne, 23, two activists who help organize Freedom Fighters DC, discuss their tasks in preparation for a protest against racial inequality in the aftermath of the death of George Floyd at the hands of Minneapolis police, in Washington, D.C., U.S., June 5, 2020 in this screen grab taken from a video. REUTERS/Gershon Peaks

WASHINGTON (Reuters) – Jacqueline LaBayne and Kerrigan Williams met for the very first time in person on Wednesday, at a sit-in they organized in front of the U.S. Capitol over the death of George Floyd.

They have been using social media, which they call a “tool of justice,” to rally a new, ethnically-diverse generation of young activists connecting online to protest Floyd’s May 25 death and push for civil rights reforms in the nation’s capital.

Floyd, a 46-year-old African-American man, died after a white Minneapolis police officer knelt on his neck for nearly nine minutes.

The death, recorded on a bystander’s cellphone, sparked a storm of protests and civil strife, thrusting the highly charged debate over racial justice back to the forefront of the political agenda five months before the Nov. 3 U.S. presidential election.

“We spotted each other via a mutual friend’s thread on Twitter immediately following yet another police-executed murder,” said Williams, a 22-year-old black woman who moved to Washington from Houston, Texas and is pursuing graduate studies at Georgetown University.

“Now, we organize together in real life to help other first-time activists get involved in local responses to injustice.”

Within hours of Floyd’s death, they had founded Freedom Fighters DC, which now counts 10,000 Twitter followers, 20,000 Instagram followers, and brought hundreds of demonstrators to Washington in recent days, most of them “Generation Z-ers,” some of about 70 million Americans born after the mid-1990s.

Tens of thousands of demonstrators have gathered in Washington and other U.S. cities since Floyd’s death to demand an end to racism and brutality by U.S. law enforcement and push for justice in the Floyd case.

‘A CRY FOR JUSTICE’

Williams and LaBayne spent much of the week scrambling to take care of details mundane and profound ahead of the sit-in on Wednesday and a march from a U.S. Senate office building to Lafayette Park in front of the White House.

LaBayne solicited T-shirt donations for volunteers and fielded requests for media interviews. Williams got advice from the group’s five other board members on an intended route for Saturday’s march and reminded attendees to wear comfortable shoes.

“Sometimes we argue over priorities. Sometimes we make compromises. But in the end, we keep the main thing the main thing – a cry for justice for all brothers and sisters,” added LaBayne, who plans to become a civil rights lawyer.

Wednesday’s sit-in attracted a diverse group of about 500 protesters who sat in front of a line of police officers. One volunteer successfully convinced a white officer to kneel with her, drawing cheers from the protesters. Others passed out information on jail assistance for those who are arrested and promoted voter registration.

More than 2,000 people showed up for the Freedom Fighters’ march on Saturday, many of them first-time activists.

“Americans of different races saw the video of (Floyd’s) death on social media,” Williams said. “They also see our lives as regular people and were attracted to the cause. Like-minded, progressive people will always see themselves as stronger in large, diverse numbers. It makes the message of justice more compelling.”

LaBayne and Williams say they hope their efforts lead to substantial reforms, including de-funding Washington’s Metropolitan Police Department and an ending its contract with the District of Columbia’s Public Schools system.

“We do not seek to silence the wave of support by other movements for black lives, but we see an immediate need to use this as a springboard to specifically highlight the injustices of Washington natives,” LaBayne.

“This is the focus of Freedom Fighters DC beyond this current moment,” LaBayne said. “I just want people to take away that change is on the way, and we are here to usher it in.”