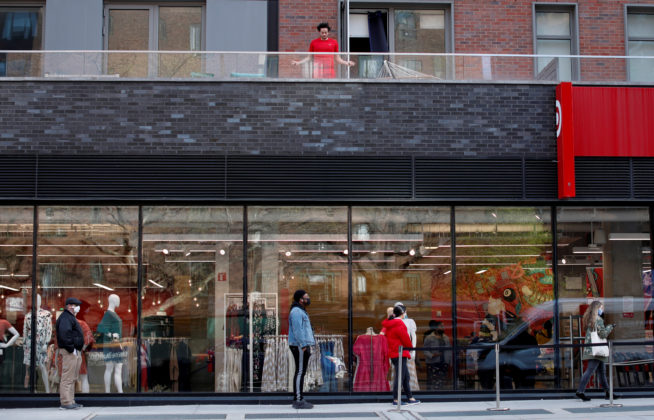 FILE PHOTO: A man jumps rope on his apartment balcony above a Target store as shoppers wait at a social distance below during the outbreak of the coronavirus disease (COVID-19) in New York City, New York, U.S., April 16, 2020. REUTERS/Mike Segar/File Photo

LONDON (Reuters) – Michael Clark of Amy’s Housewares has one big fear as its London stores prepare to reopen on June 15 along with other retailers around Britain: “Customers not spending, having no trust in the economy.”

His concern, captured in a survey by the British Independent Retailers Association (BIRA) before a nationwide easing of social distancing measures, may be well-founded.

Across the world, consumers are emerging from lockdowns warier and more thrift-conscious than before. That will drag on any recovery and could encourage governments and central bankers to follow up on coronavirus handouts with more costly stimulus.

The new thrift is showing up in various ways: some households are hoarding the cash they saved during lockdowns; some are flocking to cheaper brands or sticking with essentials.

Other risks to consumer demand include the outright collapse of purchasing power among those whose livelihoods were ruined by the pandemic and even imponderables such as what happens to spending patterns if more people continue to work from home.

In China, shopping malls began to fill up again from April after lockdown eased. Online sales have surged in some categories, often helped by discounts and state coupons.

But a lingering wariness about items deemed non-essential means consumers may still not emerge as the pillar of growth which Beijing hopes they will be.

“Consumers are placing a greater focus on essential spending categories,” Fitch Solutions said in a June 4 report, predicting a fall in Chinese household spending this year and slashing its 2020 growth forecast to just 1.1% from 5.6% before the pandemic.

In the United States, commonplace brands such as chocolate giant Hershey or toothpaste-maker Colgate say consumers have traded down. Dollar stores, meanwhile, expect to open their doors to a new set of customers as they did after the 2008-09 Great Recession.

“In 2008, folks lost jobs … and they found us. And I think that’s some of what we’re planning for as we take a look into our crystal ball at back half of the year and 2021,” Dollar Tree Chief Executive Gary Philbin said on May 28.

Much hangs now on what happens to the mountain of savings built up by those U.S. households which weathered the worst of the lockdown fall-out and have pushed the overall U.S. savings rate to a record 33% of income.

While that rate will fall, those who expect cash to flood back into the economy may be disappointed. A 2012 paper by IMF researchers found that lingering uncertainty after the onset of the 2008-09 recession boosted saving rates durably, leading to lower consumption and growth in the wider economy.

Moreover many U.S. households are about to suffer “income cliffs” with one-off tax rebates expiring in May and pandemic unemployment compensation ending in July, Oxford Economics said, forecasting lower household income through the rest of the year.

“This will likely act as a constraint on the consumer spending recovery well into 2021,” it said in a June 3 note.

Such a scenario could force policy makers across the world to encourage savers to spend by speeding up moves to ease lockdowns, offering more economic support or pushing interest rates further towards, and even into, negative territory.

The same dilemma exists in Europe. The European Central Bank expects household savings to rise six points to 19% of income this year and remain high next year due to what economists call “scarring”, when an event leaves a durable impact on behaviour.

Citing the risk of cash-hoarding, French Finance Minister Bruno Le Maire has called for direct incentives to boost demand. The budget he will present next week will forecast a drop in consumer spending of 10% this year as households amass savings.

Germany has announced a cut in valued-added tax for the second half of the year to drive consumption, coupling that with cash handouts to parents.

Presenting hefty downgrades of the bank’s eurozone growth protections on Thursday, ECB President Christine Lagarde said the depth of scarring of domestic demand was one big factor that will determine the size of the contraction and recovery to come.

She warned: “Overall, the (ECB) Governing Council sees the balance of risks … to the downside.”