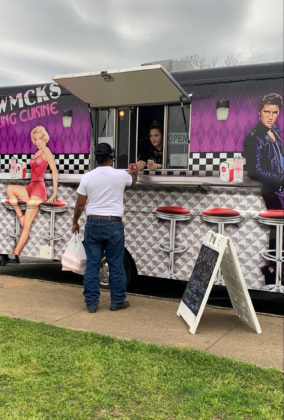 It was a welcome respite for White, who like other U.S. truck drivers is scrambling to find food – as well as bathrooms, showers and protective gear – after millions of businesses closed to help contain the spread of COVID-19 infections.

The Federal Highway Administration (FHWA) on April 3 gave mobile restaurants temporary permission to use Interstate rest areas to feed truckers who are transporting vital food, personal protective equipment and medical devices during the COVID-19 pandemic that has killed more than 20,000 people in the United States. “This is so needed,” White, 51, told Reuters via cellphone.

“I haven’t had a funnel cake since I was a teenager,” White said. “I was smiling the whole time they were cooking it.”

U.S. restaurants have shuttered or switched to limited service due to stay-at-home orders covering most of the country.

While many fast-food service windows are open, truckers told Reuters their tractor-trailers don’t fit in drive-through lanes and walk-up orders are not allowed. “Sometimes you just want a decent meal,” said trucker Rodney Tweedie, 52, who transports everything from produce to beer in his “reefer” – as refrigerated trailers are known.

“Food trucks may provide vital sustenance for interstate commercial truck drivers and others who are critical to the nation’s continued ability to deliver needed food and relief supplies to the communities impacted by the economic disruptions and healthcare strains caused by COVID-19,” FHWA said in its notice.

States like Arkansas, Ohio, Indiana and Florida are rushing to issue temporary permits to get the emergency food truck program rolling.

Jennifer McKinzie said it took just hours to get the permission she needed to operate BowMcks Rolling Cuisine at two Arkansas rest stops. A few days later, McKinzie and her husband were selling a $10 pot roast dinner with potatoes, salad, gravy, bread and a drink to White and other drivers.

“I’m sure they’re tired,” said McKinzie, who enjoys giving truckers what they need to recharge.

“Yesterday, we heard a guy say, ‘I just need a Monster (energy drink).’ Today we have Monsters,” McKinzie said.

The National Association of Truck Stop Operators (NATSO) is lobbying the FHWA and governors to hit the brakes on the program. NATSO represents the interests of companies like TravelCenters of America Inc and Pilot Flying J, which is partly owned by Warren Buffett’s Berkshire Hathaway Inc.

The National Restaurant Association and the organization that represents blind vendors, who are allowed to manage vending machines at rest areas along federal Interstates, have joined NATSO’s protest.

“We want to, but the state of Michigan says we can’t,” Werner said.