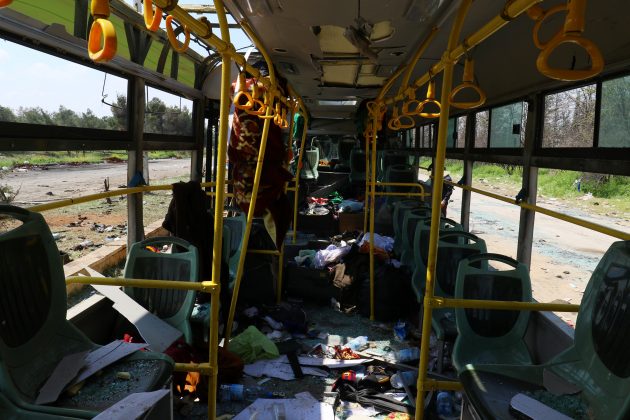 The interior of a damaged bus is seen after an explosion yesterday at insurgent-held al-Rashideen, Aleppo province, Syria April 16, 2017. REUTERS/Ammar Abdullah

BEIRUT (Reuters) – Mothers Noha, a Shi’ite, and Samira, a Sunni, were besieged for nearly two years on each side of Syria’s civil war. At the weekend they finally escaped the suffocating blockades under an evacuation agreement – but their ordeal was not over.

As they waited at two transit points miles apart outside Aleppo, a bomb attack hit Noha’s bus convoy, killing more than 120 people including dozens of children. After ambulances rushed off the wounded, new buses arrived and the two convoys eventually reached their destinations – one in government territory and the other in rebel territory.

In the hours leading up to Saturday’s attacks, the two women spoke to Reuters about what they had left behind, their families being split up, and the likelihood they would never return home.

Reuters was not allowed back past security to try to find Noha after the blast, and lost contact with Samira after speaking to her earlier on another evacuee’s phone.

“We’ve lost everything. We hope to go back one day, but I don’t expect we will,” said Noha, 45, asking not to be identified by her last name.

Noha left al-Foua, one of two Shi’ite villages besieged by Syrian insurgents in Idlib province with her two youngest children and 5,000 other people under a deal between the Syrian government and armed opposition.

In exchange, 2,000 Sunni residents and rebel fighters from the government-besieged town of Madaya near Damascus – Samira’s hometown – were given safe passage out, and bussed to Idlib province, a rebel stronghold, via Aleppo.

Thousands of Syrians have been evacuated from besieged areas in recent months under deals between President Bashar al-Assad’s government and rebels fighting for six years to unseat him.

The deals have mostly affected Sunni Muslims living in rebel-held areas surrounded by government forces and their allies. Damascus calls them reconciliation deals and says it allows services to be restored in the wrecked towns.

Rebels say it amounts to forced displacement of Assad’s opponents from Syria’s main urban centres in the west of the country, and engenders demographic change because most of the opposition, and Syria’s population, are Sunni.

But backed militarily by Russia and Shi’ite regional allies, Assad, a member of Syria’s Alawite minority, has negotiated the deals from a position of strength.

“There was little choice. We had to leave, we were scared,” said Samira, 55, who was traveling with her five adult sons.

She had feared her sons would be arrested or forced to join the Syrian military and fight once troops and officials of the Damascus government moved into the town.

Like Noha, Samira was relieved to have escaped a crushing siege which had caused widespread hunger – and in the case of Madaya, starvation – but had left everything behind, including family.

“We owned three houses, farmland and three shops in Madaya town. Now, we don’t have a single Syrian pound,” she said.

Her daughter, pregnant with a third child, had stayed in Madaya because her husband had vowed to “live and die” there, she said.

Samira has not heard from her own husband for nearly four years after he was arrested by Syrian authorities.

With nothing left and no place to stay in Idlib other than camps, Samira said she would try to migrate, joining the 5 million Syrian refugees who have left since the war broke out in 2011. More than 6 million are internally displaced.

“I don’t want to be in Idlib, we know no one there. Also you don’t know when or where the jets might bomb,” she said, referring to the heavy bombardment by Russian and Syrian warplanes of rebel-held areas in Idlib – including a recent alleged poison gas attack.

“The plan is to try to get to Turkey, to leave Syria for good.”

Noha was also heading into the unknown.

“I don’t know where we’ll live, whether they (authorities) have anything set up. At the very least, we just want to be safe. The children jump at night from the sound of rockets. We just want security, wherever they take us,” she said.

Her adult son and daughter had stayed in al-Foua but were hoping to leave in the next stage of the evacuation deal. Noha’s husband had been killed, but she did not say how.

Both women said they would never have left their hometowns but for the strangling sieges, which caused severe food and medicine shortages, and the gradual change of control in each area.

Government forces moved into Madaya on Friday. Rebels are also due to leave nearby Zabadani as part of the deal. In al-Foua and Kefraya, hundreds of pro-government fighters were evacuated, and the agreement will pave the way for insurgents to take over.

Russia, Iran and Lebanese Hezbollah have helped Assad gain the upper hand against rebels in the west of the country in the last 18 months and he now controls all of Syria’s most populous cities there, although insurgents have made gains in some areas.

But with the war that has killed hundreds of thousands far from over, those displaced in swap deals see return a long way off.

“People have built their houses and worked their whole lives setting themselves up, and now they’ve left, with nothing, zero,” Noha said.