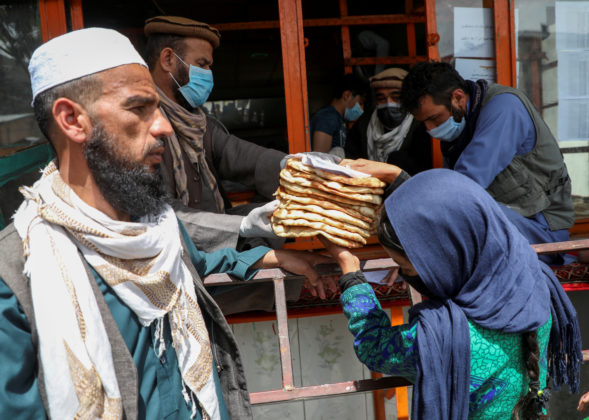 FILE PHOTO: An Afghan girl receives free bread distributed by the government, outside a bakery, during the coronavirus disease (COVID-19) outbreak in Kabul, Afghanistan May 3, 2020. REUTERS/Omar Sobhani

GENEVA (Reuters) – The United States pledged $600 million in civilian aid to Afghanistan next year at a key donor conference on Tuesday, but made half of it conditional on progress in U.S.-brokered peace talks underway with the Taliban.

Dozens of nations, international institutions and the European Union combined to pledge billions in aid for Afghanistan at the conference in Geneva. But many, including the United States and Germany, slapped strict conditions on future funding and some committed for just the next year – departing from four-year pledges made in the past.

Diplomats said keeping financing for Afghanistan on a tight leash could provide foreign governments with some leverage to inject a greater sense of urgency into a halting peace process.

“We’re pleased to pledge today $300 million…with the remaining $300 million available as we review progress in the peace process,” U.S. Under Secretary of State for Political Affairs David Hale said in a virtual address to the conference.

The United States has contributed roughly $800 million a year in civilian aid in recent years.

Another top donor, Germany, pledged 430 million euros ($510.88 million) in 2021 and signaled it would keep contributing until 2024 but also stressed that progress towards ending almost 20 years of war was needed.

Talks in the Qatari capital Doha between the Afghan government and Islamist Taliban insurgents began in September but have been mired in procedural wrangling as violence has resurged around the country.

But Hale said “significant progress” had recently been made, including a tentative agreement on ground rules that could allow negotiators to proceed to the next stage of forming an agenda.

As the donors conference proceeded, two explosions rocked an outdoor market in the central province of Bamyan, usually considered one of Afghanistan’s safest areas, killing at least 14 people and wounding almost 45, mostly civilians.

During the lead-up to the quadrennial international donors conference, diplomats reckoned Afghanistan could receive 15-20% less funding than the roughly $15.2 billion pledged at the last conference in Brussels in 2016 due to uncertainties over the peace process and difficulties securing commitments from governments financially strapped by the coronavirus pandemic.

Uncertainty over whether the compromises needed for peace might lead to backsliding on human and women’s rights has also made some countries wary about making long-term commitments to an Afghan administration, which needs foreign money to cover about three-quarters of its spending.

“Any attempt to restore an Islamic emirate would have an impact on our political and financial engagement,” he added, referring to the Taliban’s previous hardline Islamist rule between 1996 and 2001.

Conference organizers have said curbing corruption was another wish on the part of countries considering donations.

Some such as Britain announced pledges covering only one year.