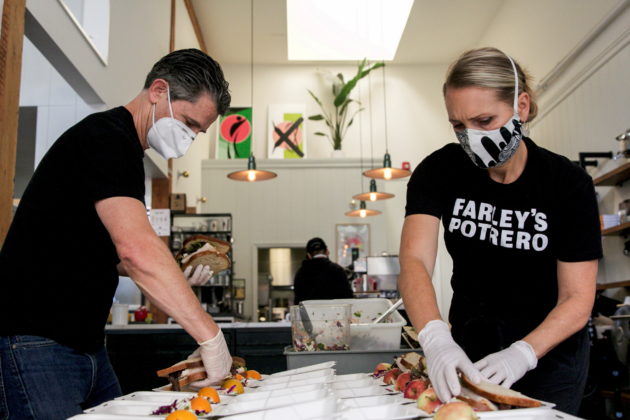 (Reuters) – After more than a year of heavy losses at their two cafes in the San Francisco Bay Area, Amy and Chris Hillyard were relieved to get word in May that they’d been approved for a $381,000 grant from the U.S. Small Business Administration.

The money was from a fund earmarked by Congress for restaurants hurt by the economic fallout from the coronavirus pandemic, like the Hillyards’ Farley’s SF and Farley’s East operations.

Equal to their losses last year, it would let the couple pay back debt, hire new employees, expand opening hours, replace a broken freezer, buy tables and chairs for outdoor dining, and do all the other things Chris Hillyard says need to get done “to get back to normal and be ready for normal, come September,” when more workers might be expected to return to nearby office buildings.

Then, last month, the Hillyards learned they won’t get the money after all.

“We are back in a holding pattern” Chris Hillyard said. “It’s not a very fun place to be.”

Even after roughly $800 billion in aid from the federal Paycheck Protection Program (PPP) and nearly $30 billion more earmarked for hard-hit restaurants this year, small U.S. businesses face an uncertain outlook.

Many enterprises that were thriving before the pandemic are still hobbled.

At the same time, a widely predicted wave of bankruptcies has not materialized, with commercial bankruptcies in 2020 at their lowest level in five years and year-to-date filings lower still, according to data provider Epiq AACER.

Complicating the picture are regional discrepancies.

Some 35% of San Francisco Bay Area establishments like those of the Hillyards still report a large negative impact from the pandemic and more than 41% think it will take more than another six months to return to normal, a U.S. Census Bureau survey from mid-July shows. Meanwhile, in Atlanta, only 21% and 31%, respectively, of respondents reported the same concerns.

That suggests a genuine national recovery may be some ways off.

“The problem is for the economy, the pandemic has gone on longer than we thought, and it looks like different industries and different geographies have been affected very differently,” said Karen Dynan, an economics professor at Harvard University. “It’s just another reason that we are not going to see the economy go back to full employment overnight.”

NOT BACK TO NORMAL

Reuters has been following the Hillyards and their cafe business since March 2020, when they laid off their entire staff after California shut down all “non-essential” businesses. They reopened six weeks later with a PPP loan, got through the summer with help from donors like Golden State Warriors basketball star Stephen Curry, and pulled through the winter viral surge and renewed government curbs on business with a second PPP loan.

But despite the state’s decision to end all pandemic-era restrictions in mid-June, Farley’s in San Francisco is making only 70% of its pre-pandemic sales. Farley’s East in Oakland – the bigger operation of the two – is at just 40%, and any hope for improvement depends on how businesses manage their employees’ return to offices.

“I think the service sector that supported the downtown work community is one we should be worried about it,” Dynan said, because many businesses will likely allow at least some remote work in the post-pandemic period. “Breakfast places, lunch shops, dry cleaners, pharmacies downtown – they are just not going to see demand that’s as robust.”

The Hillyards have spent the $520,000 in federal aid they received, most of it on payroll for their 20 employees.

The latest grant the Hillyards were counting on was part of the $1.9 trillion pandemic relief package passed by Congress and signed by President Joe Biden in March, which included $28.6 billion for restaurants that lost money during the pandemic.

By the time the restaurant fund had run out, the owners of 278,000 restaurants had applied. Some 101,000 got grants ranging from as large as $10 million to as small as $1,000, critical support for one of the sectors hardest hit by the pandemic.

The Hillyards were relieved to be among them.

“Congratulations,” the May 18 email from the SBA read. “Your SBA Restaurant Revitalization Fund application has been approved.” It continued, “The SBA will now process the funding of this award directly to your Bank account within 3-7 business days from this notification.”

Weeks went by. The Hillyards made inquiries. “Be assured the award funds are reserved for those applications that have been fully approved and will be sent,” one SBA portal response reviewed by Reuters said.

On June 23, Chris Hillyard received another email from the SBA. “We regret to inform you that, due to recent court rulings, the SBA will not be able to disburse your Restaurant Revitalization Fund award,” it read.

A legal group founded by Stephen Miller and Mark Meadows, who held senior positions in former President Donald Trump’s White House, had sued the SBA in Texas, arguing that the Biden administration’s efforts to prioritize applicants on the basis of race and gender was unconstitutional.

On June 11, the court barred the SBA from handing out any more of the funds to priority applicants like Farley’s, which is majority woman-owned because of Amy Hillyard’s larger share in the business.

“In coming days … you will see the status of your application in SBA’s portal change to ‘fully canceled,'” the June 23 email said. Some 2,964 other restaurant owners got similar notices, SBA said. A spokesperson for the SBA said the agency was “frustrated” with the outcome and remains committed to helping disadvantaged businesses.

The Independent Restaurant Coalition, a U.S. trade group which lobbied to get the grant program into the pandemic relief bill in the first place, is now trying to convince Congress to replenish the program’s funds.

To the Hillyards, that’s cold comfort, even as the economy as a whole, despite the rising tide of COVID-19 infections, surges back to life. Their cafes continue to lose money each month.

“Everything is going back to normal – but our business is not back to normal, and it’s going to take us a lot longer to get there,” Chris Hillyard said.