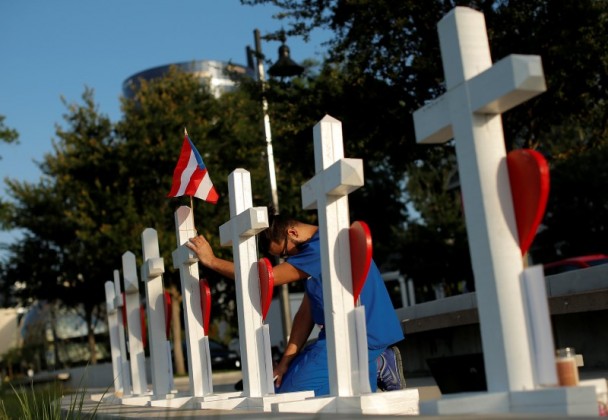 Ernesto Vergne kneels at a cross in honor of his friend Xavier Emmanuel Serrano Rosado who was killed at the Pulse nightclub in Orlando, Florida, U.S. June 17, 2016. REUTERS/Jim Young

ORLANDO, Fla. (Reuters) – Families of some of the 49 people killed in a massacre at a nightclub will bury their dead on Friday, as Orlando holds funerals over the next two weeks for victims of the worst mass shooting in modern U.S. history.

Like many of the victims of Sunday’s attack on the Pulse club, Anthony Luis Laureano Disla, 25, was from Puerto Rico. He is to be buried on Friday, according to the Newcomer Funeral Home, a day after more than 150 friends and family mourned him at a wake.

The gunman, Omar Mateen, a 29-year-old U.S. citizen born in New York to Afghan immigrant parents, claimed allegiance to a conflicting list of Islamist militant groups, including Islamic State, in a series of phone calls and internet messages during his three-hour rampage, which ended when police shot him dead.

U.S. officials have said they do not believe he was assisted from abroad in the attack, which also wounded 53 people.

Members of 94 families who had relatives among the dead and wounded have visited a downtown football stadium where civil agencies are proving relief services, Orlando Mayor Buddy Dyer told reporters on Friday.

Dyer said he would go to the funerals that families asked him to attend. “I will ask the community to do the same … These are private ceremonies, people are hurting,” he said.

Kenneth Feinberg, the lawyer who helped administer compensation funds for victims of the Sept. 11, 2001, attacks on New York and Washington and the 2013 Boston Marathon bombing, is flying in to Orlando to advise the city’s Orlando United relief fund, Dyer said.

Separately, the National Compassion Fund, a unit of the nonprofit National Center for Victims of Crime, was tapped on Thursday by gay rights group Equality Florida, to distribute the roughly $5 million raised online for the victims. [L1N1971VU]

On Thursday, more than 300 people, including Florida Governor Rick Scott, attended the viewing for Eric Ivan Ortiz-Rivera, who was born in Dorado, Puerto Rico. He was 36 when he was killed during a night of dancing to celebrate a friend’s new house. His husband had stayed home that night in the couple’s apartment.

“He was in a Snapchat video that’s out there, dancing away, so we know he had some fun before the madness,” said his cousin, Orlando Gonzalez.

President Barack Obama, who met survivors of the shooting and families of the dead in Orlando on Thursday, urged Congress to pass measures to make it harder to legally acquire high-powered weapons like the semi-automatic rifle used in the attack.

Mateen carried out the slaughter with the rifle and a handgun that had been legally purchased although he had twice been investigated by the FBI for possible connections with militant Islamist groups.

Congress is under pressure to respond and on Thursday the Senate inched toward votes on a series of gun control measures, although it is far from likely the measures will pass. The Senate is expected to vote on Monday on four proposals for gun restrictions.