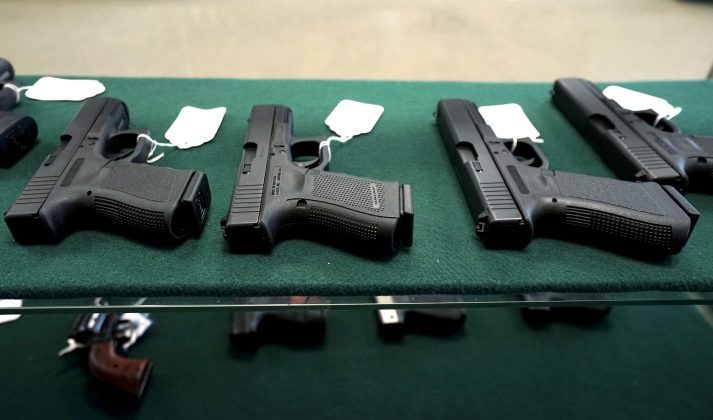 A selection of Glock pistols are seen for sale at the Pony Express Firearms shop in Parker, Colorado December 7, 2015. REUTERS/Rick Wilking/File Photo

(Reuters) – Georgia Governor Nathan Deal on Thursday signed a bill allowing guns on college campuses in the state, making it the 11th of the 50 U.S. states to do so.

Since the 2007 shooting deaths of 32 people by a student at Virginia Tech, a university in southwestern Virginia, state legislatures have grappled with the question of allowing licensed gun owners to bring their weapons on college campuses.

Deal said in a statement that he believed that people licensed to carry guns could help increase safety on college campuses. He said students at campuses where guns are known to be disallowed are easy prey for assailants.

“At the present time, assailants can, and do, target these students knowing full well that their victims are not permitted to carry protection,” said Deal.

On March 31, the Republican-controlled Georgia Senate and House of Representatives approved the guns-on-campus measure and sent it to Deal, a Republican.

Laura Cutilletta, legal director for the Law Center to Prevent Gun Violence, said her group was disappointed in Deal’s action.

“Colleges and universities are safe havens from gun violence, largely because guns are prohibited on the vast majority of campuses. Allowing guns on campus will jeopardize students, faculty and staff and likely lead to more campus homicides and suicides,” Cutilletta said in an email.

The new Georgia law will prohibit firearms in some campus areas with large crowds, including football stadiums and basketball arenas.

Guns will remain prohibited in campus housing, including fraternity and sorority houses; any rooms where high school students are taking classes; rooms where disciplinary hearings are held; preschool or child care areas; and faculty, staff and administrative offices.

The American Journal of Public Health found that 23 percent of Americans in a recent survey supported guns on college campuses. (http://in.reuters.com/article/us-health-guns-public-opinion-idINKBN17N28Y)