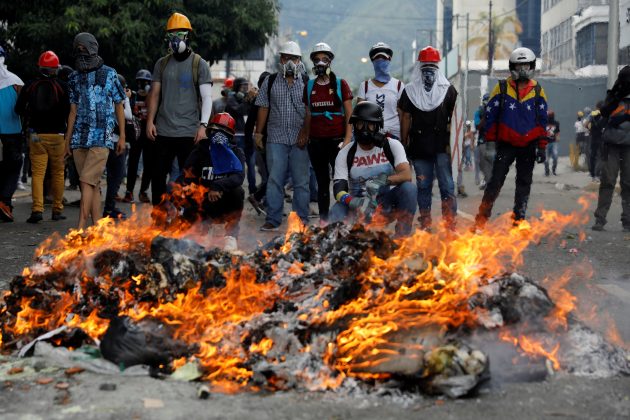 Opposition supporters stand in front of a fire during clashes with riot police at a rally against President Nicolas Maduro in Caracas, Venezuela May 3, 2017. REUTERS/Carlos Garcia Rawlins

By Alexandra Ulmer and Diego Oré

CARACAS (Reuters) – Supporters of jailed Venezuelan opposition leader Leopoldo Lopez held a vigil outside his prison demanding to see him on Thursday after rumors about his health rattled the protest-hit country where the death toll from anti-government unrest rose to 36.

Lopez’s wife and mother rushed to a military hospital in Caracas and then the hilltop Ramo Verde jail overnight, after a journalist tweeted Lopez had been taken to a medical center without vital signs.

President Nicolas Maduro’s leftist government, facing a wave of major opposition protests since last month, later issued a short “proof of life” video in which Lopez said he was fine.

Officials accused Lopez’s family of stirring up a media frenzy to get attention and further stoke the protests.

“Today is May 3, it’s 9 p.m. … I’m sending a message to my family and my children that I am well,” said Lopez, 46, standing cross-armed in front of cell bars and looking healthy in a sleeveless white T-shirt.

But Lopez’s wife Lilian Tintori, who says she has not been allowed to see him in over a month, rejected the video as “false” and spent the night outside the jail.

“The only proof of life that we will accept is to see Leopoldo,” she tweeted, as she and Lopez’s mother faced a line of green-clad National Guard soldiers at the prison. They later rotated out with some supporters to get sleep.

Lopez is Venezuela’s most prominent imprisoned politician, and U.S. President Donald Trump in February called for his release after a White House meeting with Tintori.

Venezuelans, already on tenterhooks after the unrest that has killed protesters, government supporters, bystanders and security officials, were shaken by the rumors over Lopez, who was jailed in 2014 during the last major round of protests.

The U.S.-educated economist and leader of the hard-line Popular Will party is accused of inciting violence, and in 2015 was sentenced to almost 14 years behind bars.

The government says he is a dangerous agitator, pointing to his involvement in a brief 2002 coup against the late Hugo Chavez, when Lopez even helped arrest a Cabinet minister.

“They’re inventing that something or other has been done to Leopoldo to put together a big, pretty show, so that we forget the 43 deaths he caused,” said Socialist Party No. 2 Diosdado Cabello, in reference to those killed during unrest in 2014.

Lopez’s supporters say he was tried in a kangaroo court because he had been viewed as a future presidential hopeful and a threat to Maduro. Others in the opposition deem him a divisive hothead who took to the streets too early and say his supporters exaggerate incidents to get support.

Over 1,700 people have been arrested, with 597 of them still jailed, since the unrest began in early April, according to rights group Penal Forum. Hundreds have been injured, often in confusing street melees between stone-throwing youths and security forces firing tear gas and water cannons.

Maduro’s call on Monday to rewrite the constitution has energized the protest movement, and images of a military vehicle running over a demonstrator on Wednesday caused further outrage.

The opposition is so far maintaining momentum despite fatigue, injuries, disruptions to daily life, and fears that protests will end up flopping like so many times in the past.

Still, none of their demands have been met so far and Maduro has said he will not bend to them.

Demonstrators are seeking early elections to remove Maduro and bring an end to a devastating recession that has food and medicine running short. The government says the opposition wants a coup and many demonstrators are simply vandals.

Various groups of students took to the streets on Thursday.

One group of several hundred from Venezuela’s Central University tried to reach a highway but were blocked by National Guard soldiers firing tear gas.

“We’re going to stay here until this corrupt and lying government falls,” said Ines Delgado, 22, with anti-acid indigestion medicine smeared on her face to neutralize the effects of tear gas.

The death toll in violent Venezuela’s month of unrest has been creeping up, reaching at least 36 after two latest cases.

A 38-year-old policeman in Carabobo state, Gerardo Barrera, died overnight after being shot during a protest, the public prosecutor’s office said on Thursday.

And Juan Lopez, a 33-year old president of a student federation at a university in the western Anzoategui state, was gunned down during a student assembly on Thursday, the public prosecutor’s office added. A member of the public approached him, shot him several times, and then fled on a motorcycle.

With international pressure piling on Maduro, famed Venezuelan conductor Gustavo Dudamel, who directs the Los Angeles Philharmonic, came out against him in a letter decrying repression.