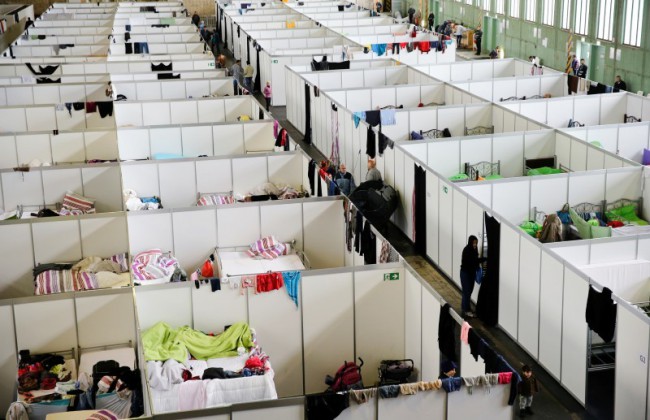 A general view of a shelter for migrants inside a hangar of the former Tempelhof airport in Berlin, Germany, on December 9, 2015. REUTERS / Fabrizio Bensch

By Caroline Copley and Michael Nienaber

The initiative follows outrage over sexual attacks on women in Cologne on New Year’s Eve blamed predominantly on North African migrants that sharpened a national debate about the open-door refugee policy adopted by Chancellor Angela Merkel.

Europe’s most populous country and largest economy has borne the brunt of the continent’s biggest refugee influx since World War Two. Some 1.1 million asylum seekers arrived in the country in 2015, most fleeing war and poverty in Syria, Afghanistan and Iraq.

Merkel’s conservative party, the Christian Democratic Union (CDU), agreed on Monday that Morocco, Algeria and Tunisia – troubled by unrest rather than full-blown conflict – should be designated safe countries.

The step is intended to reduce the number of arrivals from these countries and make deportations easier, CDU general Peter Tauber said after a meeting of senior party members.

On Sunday, Vice Chancellor Sigmar Gabriel said Berlin could cut development aid to countries that are not willing to take back citizens whose asylum applications were rejected.

Asked about Germany’s policy towards Algeria and Morocco, Gabriel told ARD television: “There cannot be a situation where you take the development aid but do not accept your own citizens when they can’t get asylum here because they have no reason to flee their country.”

To help integrate refugees and defuse social tensions that have escalated since the Cologne attacks, Gabriel called on Monday for an extra $5.45 billion a year in public spending on police, education and daycare.

“We can only manage the double task of integration, namely accommodating the new arrivals and also preserving the cohesion of our society, if we have a strong state capable of acting,” he said after a meeting of his senior Social Democrats (SPD), the coalition partner in Merkel’s government.

He said Germany needed 9,000 more police, 25,000 new teachers and 15,000 daycare workers, while funds for public housing should be doubled.

His proposal is expected to be approved at federal and state level in coming months.

Finance Minister Wolfgang Schaeuble wants to avoid the government taking on new debt in 2016, but he has admitted this may be difficult due to the ballooning refugee costs.

Part of those costs will be covered with the surplus from last year’s budget, which was a bigger-than-expected 12.1 billion euros.