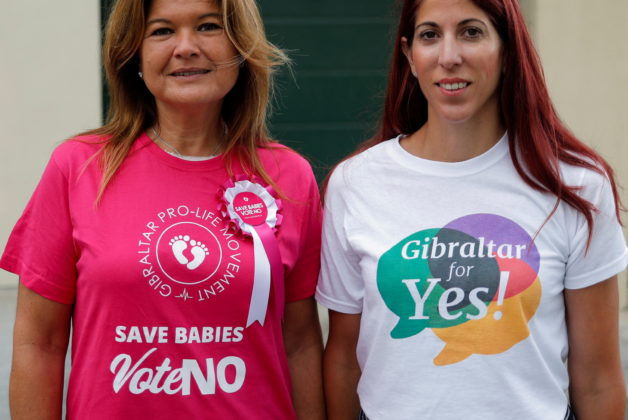 FILE PHOTO: Women, among the organisers of the Yes and No campaign, pose for a photograph during the abortion referendum outside a polling station, in the British overseas territory of Gibraltar, June 24, 2021. REUTERS/Jon Nazca/File Photo

GIBRALTAR (Reuters) -Gibraltar voted to ease a strict abortion law, officials said on Friday, after a referendum which some locals said marked a long overdue advancement of women’s rights in the tiny British territory.

Around 62% of voters who took part backed the change in Thursday’s ballot, where turnout was about 52% of the 23,000 odd eligible voters, Gibraltar’s parliament said.

“Gibraltar does have to keep up with the times, you cannot live in the past,” said Jacqueline, a Gibraltarian woman who declined to give her last name, on Friday morning.

The vote “is an excellent result for women,” chief minister Fabian Picardo, who backed ‘yes’ in a divisive campaign, said on Twitter. “We will also work to introduce the new services we will require to ensure counselling and safe and legal abortions,” he added.

Criminal law in the British enclave on Spain’s southern tip had banned abortion in all circumstances, with a maximum punishment in theory of life in prison. While no one has ever been convicted, citizens and residents were forced to go to Spain or travel to Britain to have an abortion.

The referendum had originally been scheduled for March 2020, but was postponed because of the coronavirus pandemic.

Even with the amendment approved on Thursday, the law remains more restrictive than in most of the rest of Europe.

The amendment to the criminal law approved by the referendum allows pregnancies to be terminated by a registered physician within the first 12 weeks in cases where the pregnancy carries more risk to the mother’s health than termination.

Abortions would be permitted at a later stage of pregnancy under a narrow set of circumstances.

Pro-life groups, who opposed the new bill, say the wording of the law could be interpreted in a way that would ultimately allow most abortions after 12 weeks of conception.

Others said the bill did not encourage abortion but that it was important the choice should rest with the woman.

“I am not pro-abortion, but I am pro-choice,” said Sheela, another Gibraltar resident. “I think every person should have, at the end of the day, their own right to do what they want.”

(Reporting by Marco Trujillo in GIBRALTAR and Inti Landauro in MADRID; Editing by Andrei Khalip and Philippa Fletcher)