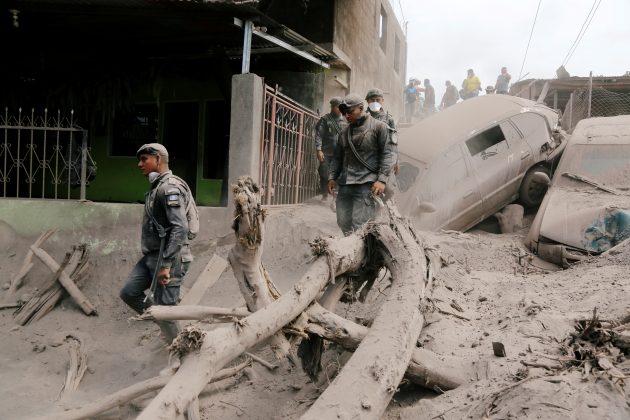 Policemen inspect at an area affected by the eruption of the Fuego volcano in the community of San Miguel Los Lotes in Escuintla, June 5, 2018. REUTERS/Luis Echeverria

GUATEMALA CITY (Reuters) – Guatemalan authorities warned that the Fuego volcano was showing signs of greater activity on Tuesday night as the death toll from a devastating eruption at the weekend climbed to 75 and nearly 200 people remained missing. 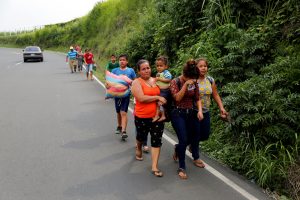 Displaced people walk along a road from an area affected by the eruption of Fuego volcano in Escuintla, Guatemala June 5, 2018. REUTERS/Luis Echeverria

The peak had its most devastating eruption in more than four decades on Sunday, showering ash on a wide area and sending lava flows through nearby towns.

The national disaster agency, CONRED, said 192 people remained missing after the disaster and the forensic agency, Inacif, raised the death toll to at least 75, up from 72.

Volcan de Fuego, which means “Volcano of Fire” in Spanish, is one of several active volcanoes among 34 in the Central American country. It lies near the colonial city of Antigua, a UNESCO world heritage site that has survived several major eruptions. 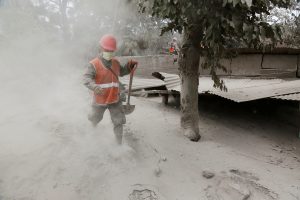 A soldier walks at an area affected by the eruption of the Fuego volcano in the community of San Miguel Los Lotes in Escuintla, June 5, 2018. REUTERS/Luis Echeverria

The latest activity has been mostly on the far side of the volcano, facing the Pacific coast.

The eruption on Sunday sent columns of ash and smoke 6.2 miles (10 km) into the sky, dusting several regions with ash. Thousands of people have been evacuated, CONRED said.