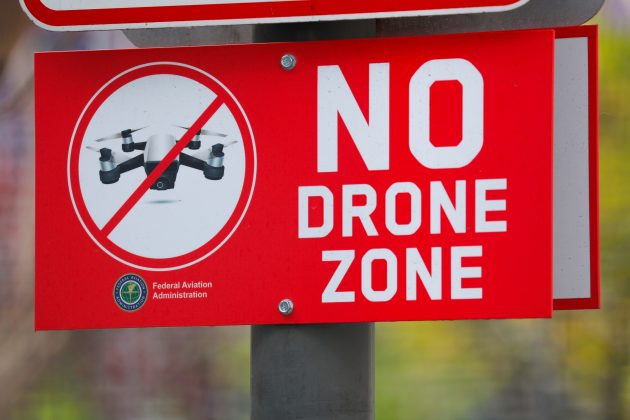 A sign at a downtown city park informs people the area is a no drone zone in San Diego, California, U.S., May 17, 2018. REUTERS/Mike Blake

WASHINGTON (Reuters) – The Trump administration urged Congress on Wednesday to give it new powers to disable or destroy threatening drones, according to testimony viewed by Reuters.

David Glawe, undersecretary for intelligence and analysis at the U.S. Department of Homeland Security (DHS), and Hayley Chang, DHS’ deputy general counsel, told the Senate committee that oversees the department that it needs new authority.

“Terrorist groups overseas use drones to conduct attacks on the battlefield and continue to plot to use them in terrorist attacks elsewhere. This is a very serious, looming threat that we are currently unprepared to confront,” the officials’ written testimony said.

A bipartisan group of senators including Senate Homeland Security Committee Chairman Ron Johnson, a Republican, and the committee’s top Democrat, Claire McCaskill, last month introduced legislation to give DHS and the Justice Department authority to “to protect buildings and assets when there is an unacceptable security risk to public safety posed by an unmanned aircraft.”

Johnson noted a bipartisan group of senators backs the legislation.

“The federal government does not have the legal authorities it needs to protect the American public from these kinds of threats. The threats posed by malicious drones are too great to ignore,” Johnson said.

Johnson said the number of drone flights over sensitive areas or suspicious activities has jumped from eight incidents in 2013 to an estimated 1,752 incidents in 2016, citing federal statistics.

The American Civil Liberties Union said in a letter to the committee that it opposes the bill, which “amounts to an enormous unchecked grant of authority to the government to forcefully remove drones form the sky in nebulous security circumstances.”

FBI deputy assistant director Scott Brunner told the committee the agency is “concerned that criminals and terrorists will exploit (drones) in ways that pose a serious threat to the safety of the American people.”

Threats could include surveillance, chemical, biological or radiological attacks or attacks “on large open air venues” like concerts and sporting events and attacks against government facilities, he said.

In March, a Coast Guard helicopter in California was forced to take evasive action to avoid a drone. A drone recently landed on the deck of the Coast Guard Cutter Sea Lion in San Diego harbor.

DHS said despite upgraded security efforts in U.S. capital area, “we are still experiencing (drone) incidents … that require an appropriate response – even if they are nuisance or non-compliant operators who disregard the rules.”

The Federal Aviation Administration said in January that more than 1 million drones have been registered. In May, the U.S. Department of Transportation picked 10 pilot projects allowing drone use at night, out of sight operations and over populated areas.