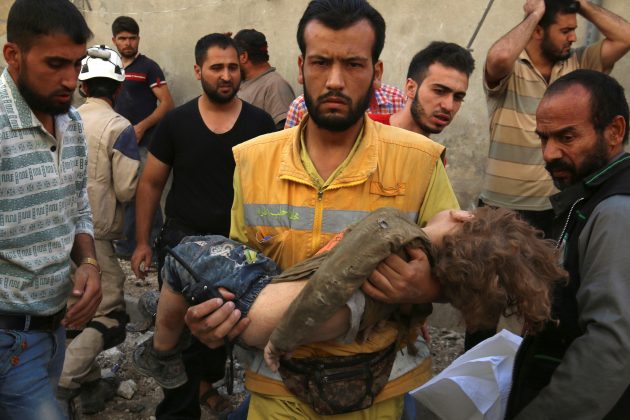 GENEVA (Reuters) – Half of the estimated 275,000 Syrians besieged in eastern Aleppo want to leave, the United Nations said on Wednesday, as food supplies are running thin and people are driven to burning plastic for fuel.

Food prices are rising and supplies are running out. Mothers were reportedly tying ropes around their stomachs or drinking large amounts of water to reduce the feeling of hunger and prioritize food for their children, the U.N. said.

“An assessment conducted in eastern Aleppo city concluded that 50 percent of the inhabitants expressed willingness to leave if they can,” the U.N. Office for Coordination of Humanitarian Affairs said in an update on the Aleppo situation.

It did not say how many of the other 50 percent were determined to stay.

The United States and other Western countries say Moscow and Damascus are guilty of war crimes in deliberately targeting civilians, hospitals and aid deliveries for more than 250,000 people trapped under siege in Aleppo. The Syrian and Russian governments say they target only militants.

Aid workers in eastern Aleppo have distributed food rations for 13,945 children under 6 years old, but a lack of cooking gas makes it difficult to cook what little food remains.

“Reports of civilians rummaging through the rubble of destroyed buildings to salvage any flammable material that can be used for cooking are common,” the report said.

“Poor-quality fuel, which is made from burning plastic, is available in limited amounts.”

“Moreover, arguments among spouses have reportedly increased as many women are blaming their husbands for choosing to stay while it was possible to leave the city.”

Civilians are walking up to 2 km to fetch water, which is available from boreholes, and the water situation across the city is “of grave concern”, the report said.

“Local authorities in charge of the Sulaiman Al-Halabi water station shut off the electrical power to the station to prevent extensive damage should hostilities impact the water station directly,” it said.