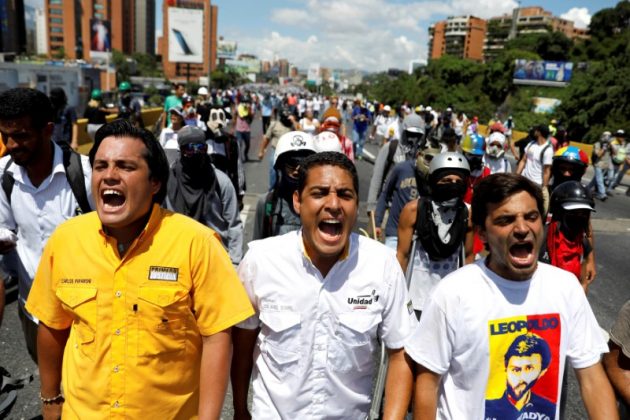 By Andrew Cawthorne and Victoria Ramirez

CARACAS (Reuters) – One was knocked off his feet by a water cannon. Another was pushed into a drain. Most have been pepper-sprayed, tear-gassed, beaten and hit by pellet shots.

A group of young Venezuelan lawmakers has risen to prominence on the violent front line of anti-government marches that have shaken the South American country for three months, bringing 75 deaths.

On the streets daily leading demonstrators, pushing at security barricades and sometimes picking up teargas canisters to hurl back at police and soldiers, the energetic National Assembly members are heroes to many opposition supporters.

But to President Nicolas Maduro’s socialist government, they are the chief “terrorists” in a U.S.-backed coup plot aimed at controlling the vast oil wealth of the OPEC nation.

The dozen or so legislators, all in their late 20s or early 30s, belong mainly to the Justice First and Popular Will parties, which are promoting civil disobedience against a president they term a dictator.

They march largely without protective gear – unlike the masked and shield-bearing youths around them – though supporters and aides sometimes form circles to guard them.

They do not receive salaries since funds to the National Assembly were squeezed, living instead off gifts from relatives and friends. And some still reside at home with parents.

One of the best known, Juan Requesens, 28, has taken more hits than most. He nurses a scar in the head from a stick thrown by government supporters, wounds around his body from pellets and gas cannisters and bruises from being shoved into a deep drain by National Guard soldiers.

“The worst thing for me is when comrades die, when they fall at my side,” the burly, bearded Requesens told Reuters, saying he had been near nine fatalities since April.

Protesters have been demanding a presidential vote and solutions to hunger and medical shortages. The deaths have included not only demonstrators, but also Maduro supporters, bystanders and members of the security forces.

There have been thousands of injuries too, and nearly 1,500 people remain behind bars, according to local rights groups, after roundups around the country.

Requesens, who represents western Tachira State where there is radical opposition to Maduro, freely admits his role as an “agitator” for the opposition. But despite his tough image, he obeyed his mother’s order to stay at home after the head injury.

“For four days, she wouldn’t let me go out – but it was fine because I rested and recovered quicker, then back again of course,” he said.

Some have dubbed the band of lawmakers “the class of 2007” for their roots in a student movement a decade ago that helped the opposition to a rare victory against Maduro’s popular predecessor Hugo Chavez in a referendum.

“It’s a group born in the street during the 2007 protests. We’re meeting up again 10 years later doing the same,” said Harvard-educated Juan Mejia, 31.

Mejia, lawmaker for Miranda State, which includes part of the capital Caracas, has lost one friend in a protest and another in an accident on the way to a march.

“For us, this is an existential struggle,” he added, saying his generation grew up under socialist rule and was fed up with economic hardship, crime and political repression.

“I’m 31 and I’d like to live off my work, but I can’t … I don’t want to depend on my parents all my life,” he added in a hotel where opposition politicians were strategizing during a brief lull in their daily street activities.

Officials accuse the lawmakers of paying youths and even children as young as 12 to attack security forces, block roads and burn property. They have threatened to jail them.

State airlines refuse to sell them tickets, and private carriers are under pressure to do the same, meaning they cannot fly around the country, the lawmakers say. Some have also had passports confiscated or annulled, blocking foreign travel.

In a typical recent speech, Maduro blasted Freddy Guevara, a 31-year-old lawmaker who leads the Popular Will party in the absence of its jailed leader Leopoldo Lopez, as “Chucky” in reference to a murderous doll in a horror film.

He also singled out Miguel Pizarro, 29, a drum-playing lawmaker with the Justice First party who recently wept at a news conference minutes after a 17-year-old was shot dead close to him during a protest in Caracas.

“He puts on that dumb face and behind it, he’s ordering them to kill and burn,” Maduro said. “Pizarro, you’re listening to me; you’ll carry this with you all your life.”

The lawmakers scoff at that, saying they now carry the nation’s dreams for change while an ever-more desperate Maduro is clinging to power against the majority’s will.

Their mantra is peaceful protest, and indeed when marches have not been blocked – such as to a state TV office and the Catholic Church headquarters – there has been no trouble.

But some admit to tossing back gas cannisters or throwing the odd stone, and there has been criticism the legislators have not done enough to restrain violence within opposition ranks, from burning property to lynching someone.

Jose Manuel Olivares, a 31-year-old lawmaker for coastal Vargas State, is a doctor and says his profession makes it all the more important to avoid violence. He recently required 12 stitches after being hit in the head by a tear gas cannister, and has often given first aid during clashes in the streets.

Yet he defends protesters’ rights to “self-defense” and admits to wearing gloves to pick up gas cannisters.

“If I’m surrounded by old people, adults or even my family, and teargas falls nears us, it’s legitimate defense to throw it back. Stones? Yes. But stones against bullets … The battle is disproportional,” he said.

“I’m not saying we’re martyrs … but we’re trying to give the best example we can, fighting for the country, saying ‘Here I am, taking risks just like you and you’.”