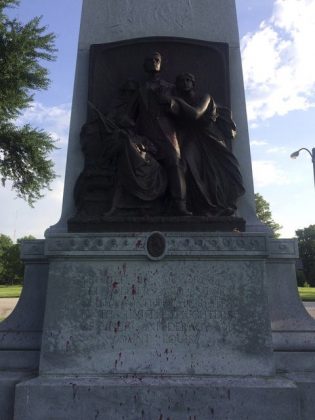 FILE PHOTO: Red paint is seen on a vandalized Confederate Memorial in Forest Park in St. Louis, Missouri in this photo from St. Louis' Mayor's office released on June 24, 2015.REUTERS/St. Louis Office of the Mayor/Handout via REUTERS/File Photo

(Reuters) – A controversial Confederate monument in St. Louis will be dismantled by the end of the week under an agreement announced on Monday, city officials said.

The granite and bronze memorial was the latest Confederate monument to be targeted as U.S. cities remove the structures seen as reminders of slavery and the racism that underpinned it.

St. Louis reached the agreement with the Missouri Civil War Museum and other groups after a lawsuit halted the city’s effort to dismantle the 32-foot memorial earlier this month, according to the mayor’s office.

The museum will pay for the removal by June 30 and store it until a new location can be found at a museum, a battlefield or a cemetery that must be outside the city, according to a copy of the agreement.

Workers were already taking apart the monument in the city’s Forest Park on Monday, shortly after the settlement was announced, St. Louis Post-Dispatch reported.

“We wanted it down,” St. Louis Mayor Lyda Krewson said at a live-streamed news conference on Monday, explaining that the structure symbolized slavery.

The push to remove Confederate monuments accelerated after the 2015 murder of nine African-Americans by an avowed white supremacist at a South Carolina church sparked a national debate about symbols of racism.

New Orleans recently dismantled the last of four Confederate statues that stood in the city, and Kentucky moved a Confederate monument from the University of Louisville campus to outside the city in Brandenburg, Kentucky.

The St. Louis monument, located on the park’s Confederate Drive, which may also be renamed, was dedicated in December 1914 by the Ladies’ Confederate Monument Association, according to the website of Forest Park Forever, which partners with the city to maintain the park. It depicts The Angel of the Spirit of the Confederacy hovering above a bronze sculpture of a family sending a soldier off to war.

It has been repeatedly vandalized with graffiti reading “Black Lives Matter” and “End Racism,” according to news reports, and the city has discussed removing it for several years.

Patsy Limpus, who heads the United Daughters of the Confederacy Missouri Division and the St. Louis Confederate Monument Association, also party to the agreement, told the Post-Dispatch Monday that the monument helped residents learn from history.

“Even though some people don’t like, it is part of history,” she said.