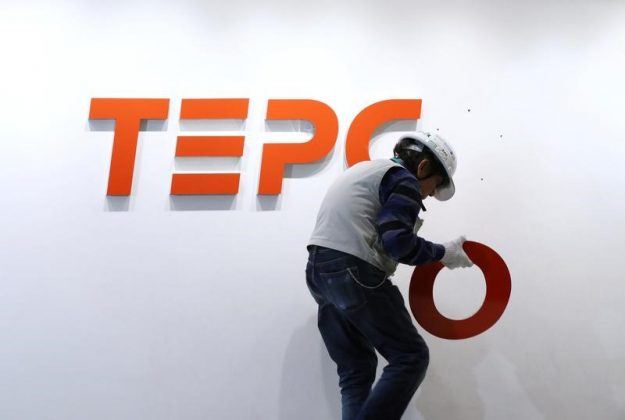 A worker puts up new logo of TEPCO Holdings and Tokyo Electric Power Company (TEPCO) Group on the wall ahead of the transition to a holding company system through a company split at the TEPCO headquarters in Tokyo, Japan, March 31, 2016. REUTERS/Masayuki Terazawa/Pool/File Photo

According to the Japan Times the power plant has reached a maximum of 530 sieverts per hour.  At 530 sieverts, a person could die from even the briefest exposure.  This highlights the difficulties that lie ahead for TEPCO and the Japanese Government as they try to figure out a way to dismantle all three reactors that were damaged by the March, 2011 9.0 earthquake and giant tsunami that killed almost 16,000 people.

Officials had never taken into account for the “unimaginable” radiation levels that are being seen.  Experts say that 1 sievert could lead to infertility, loss of hair and cataracts.  Cancer risks increase substantially with any radiation levels above the 100 millisieverts or 1 sievert mark.

In a report by the Washington Post, TEPCO recorded radiation near the reactor core using a stick-like robot equipped with a camera and a device designed to measure radiation levels and has suggested that some melted fuel escaped.  Officials state that this was the first time this kind of device has been able to get into this part of the reactor, which explains the unprecedented amount of radiation recorded.  TEPCO said that at this level of radiation, a robot would only operate for less than two hours before it was destroyed.

If deposits that have been seen on portions of the grating are proven to be melted fuel, it would be the first time they have found even a trace of any sign of the fuel rods since the core meltdowns occurred. Levels of radiation are too high to check the actual condition of the fuel, which they believe has melted through their pressure vessels and is pooled at the bottom of their containment units.  This fuel MUST be discovered and removed before the plants can be decommissioned.

Reuters reports that TEPCO has been developing robots that can swim under water and navigate obstacles in damaged tunnels and piping to search for the melted fuel rods.  But as soon as the robots get close to the reactors, the radiation destroys their wiring and renders them useless.  TEPCO does plan to send this robot into Reactor 1 but are still unsure regarding Reactor 2 because of the very intense radiation levels.

Officials still state that these levels may not actually be rising but because they have not been tested so closely to the reactor, they are just now getting a better idea of the true levels recorded. TEPCO does report a 30% margin of error in the tests.

The effects of the radiation on the rest of the world have been in constant discussion and arguments among government officials and environmental scientists.  One year ago, PBS reported that more than 80 percent of the radioactivity from the damaged reactors ended up in the Pacific, far more than ever reached the ocean from Chernobyl or Three Mile Island.  A small fraction is currently on the seafloor, but the rest was swept up by the Kuroshio current, a western Pacific version of the Gulf Stream, and carried out to sea.  Recently, radioactive contamination has been documented near British Columbia and California.