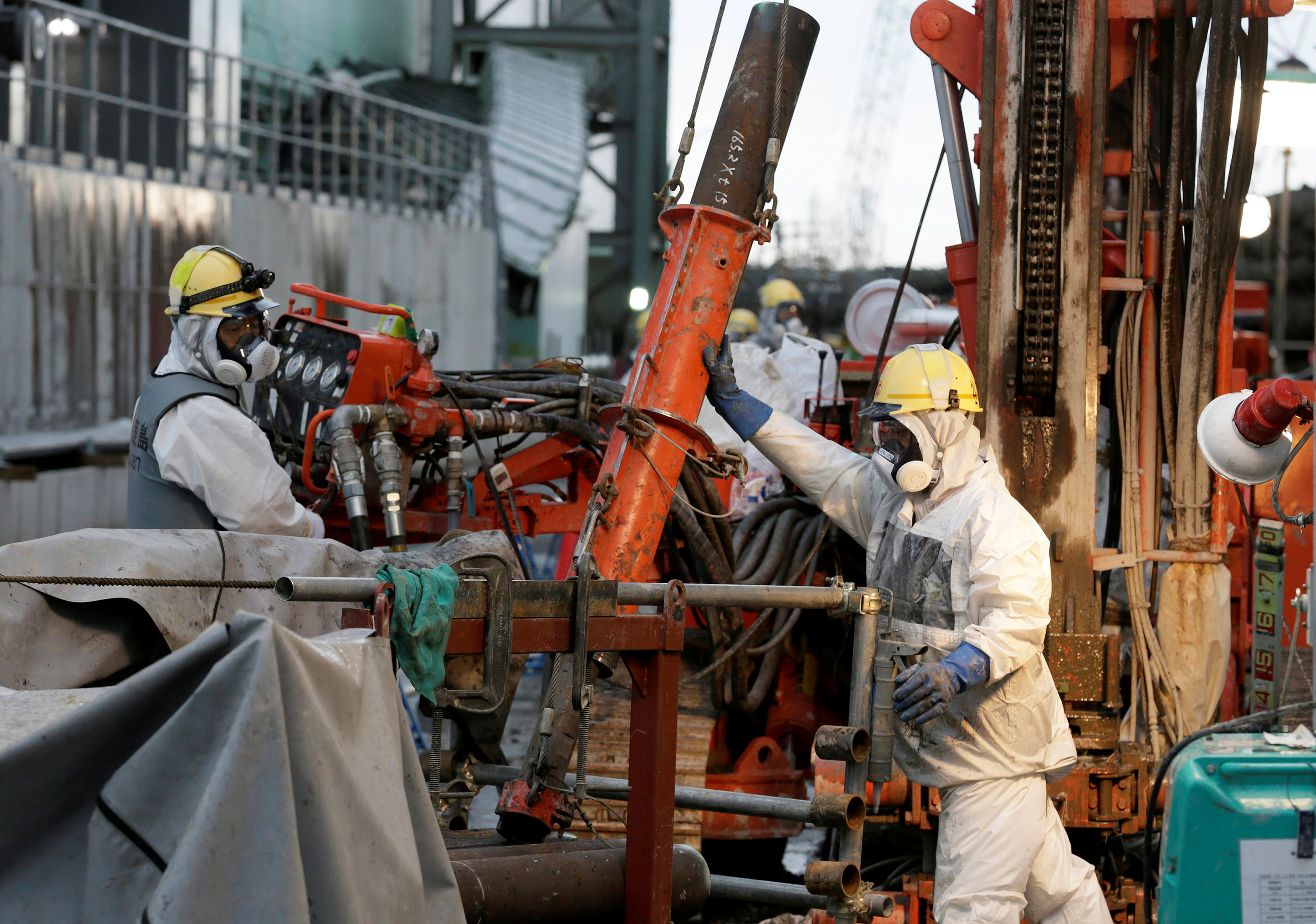 By Aaron Sheldrick and Malcolm Foster

When the ice wall was announced in 2013, Tepco assured skeptics that it would limit the flow of groundwater into the plant’s basements, where it mixes with highly radioactive debris from the site’s reactors, to “nearly nothing.”

The groundwater seepage has delayed Tepco’s clean-up at the site and may undermine the entire decommissioning process for the plant, which was battered by a tsunami seven years ago this Sunday. Waves knocked out power and triggered meltdowns at three of the site’s six reactors that spewed radiation, forcing 160,000 residents to flee, many of whom have not returned to this once-fertile coast.

Though called an ice wall, Tepco has attempted to create something more like a frozen soil barrier.

The aim is to freeze the soil into a solid mass that blocks groundwater flowing from the hills west of the plant to the coast.

However, the continuing seepage has created vast amounts of toxic water that Tepco must pump out, decontaminate and store in tanks at Fukushima that now number 1,000, holding 1 million tonnes. It says it will run out of space by early 2021.

“I believe the ice wall was ‘oversold’ in that it would solve all the release and storage concerns,” said Dale Klein, the former chairman of the U.S. Nuclear Regulatory Commission and the head of an external committee advising Tepco on safety issues.

“The hydrology of the Fukushima site is very complicated and thus the exact water flow is hard to predict,” he said, “especially during heavy rains.”

But when a typhoon struck during the last week of October, 866 tons a day poured into the reactors.

It is hard to measure exactly how much the ice wall is contributing, Tepco officials say, but based on computer analysis the utility estimates the barrier is reducing water flows by about 95 tonnes a day compared to two years ago, before the barrier was operating.

“Our assessment is that the ice wall has been effective,” said Naohiro Masuda, Tepco’s chief decommissioning officer, adding that rain falling within the ice wall perimeter contributed to surging volumes. “We now believe we have a system in place to manage the water level.”

However, a government-commissioned panel on Wednesday offered a mixed assessment of the ice wall, saying it was partially effective but more steps were needed.

Controlling the groundwater seepage using the ice wall has been central to Japan’s program to show it had the Fukushima decommissioning in hand.

The barrier was announced just days before Tokyo won the bid to host the 2020 Summer Olympics and Prime Minister Shinzo Abe declared that Fukushima was “under control” in his final pitch to the International Olympic Committee.

In addition to the building costs, the ice wall needs an estimated 44 million kilowatt hours of electricity a year to run, enough to power about 15,000 typical Japanese homes.

Meanwhile, Tepco must decide how to cope with the growing volume of water stored on site.

The purification process removes 62 radioactive elements from the contaminated water but it leaves tritium, a mildly radioactive element that is difficult to separate from water. Not considered harmful in low doses, tritium is released into oceans and rivers by nuclear plants around the world at various national standard levels.

But local residents, particularly fishermen, oppose ocean releases because they fear it will keep consumers from buying Fukushima products. Many countries, including South Korea and China, still have restrictions on produce from Fukushima and neighboring areas.

A government-commissioned task force is examining five options for disposing of the tritium-laced water, including ocean releases, though no decision has been made.

Ken Buesseler, a radiochemist at the Woods Hole Oceanographic Institution in the United States, suggests that Tepco should open the tanks to external inspections to see if the water is safe.

“From the public’s viewpoint, I think they’d want a bit of independent confirmation,” Buesseler said. “It’s no harder and a lot cheaper than building an ice wall.” 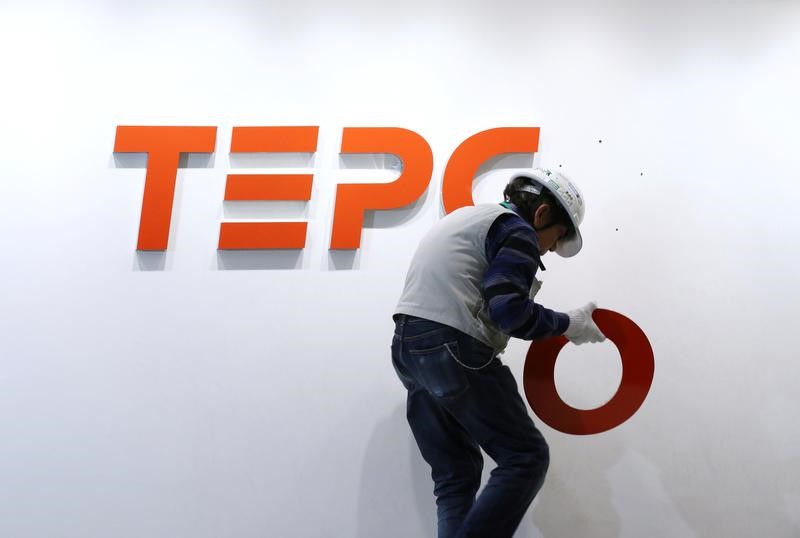 According to the Japan Times the power plant has reached a maximum of 530 sieverts per hour.  At 530 sieverts, a person could die from even the briefest exposure.  This highlights the difficulties that lie ahead for TEPCO and the Japanese Government as they try to figure out a way to dismantle all three reactors that were damaged by the March, 2011 9.0 earthquake and giant tsunami that killed almost 16,000 people.

Officials had never taken into account for the “unimaginable” radiation levels that are being seen.  Experts say that 1 sievert could lead to infertility, loss of hair and cataracts.  Cancer risks increase substantially with any radiation levels above the 100 millisieverts or 1 sievert mark.

In a report by the Washington Post, TEPCO recorded radiation near the reactor core using a stick-like robot equipped with a camera and a device designed to measure radiation levels and has suggested that some melted fuel escaped.  Officials state that this was the first time this kind of device has been able to get into this part of the reactor, which explains the unprecedented amount of radiation recorded.  TEPCO said that at this level of radiation, a robot would only operate for less than two hours before it was destroyed.

If deposits that have been seen on portions of the grating are proven to be melted fuel, it would be the first time they have found even a trace of any sign of the fuel rods since the core meltdowns occurred. Levels of radiation are too high to check the actual condition of the fuel, which they believe has melted through their pressure vessels and is pooled at the bottom of their containment units.  This fuel MUST be discovered and removed before the plants can be decommissioned.

Reuters reports that TEPCO has been developing robots that can swim under water and navigate obstacles in damaged tunnels and piping to search for the melted fuel rods.  But as soon as the robots get close to the reactors, the radiation destroys their wiring and renders them useless.  TEPCO does plan to send this robot into Reactor 1 but are still unsure regarding Reactor 2 because of the very intense radiation levels.

Officials still state that these levels may not actually be rising but because they have not been tested so closely to the reactor, they are just now getting a better idea of the true levels recorded. TEPCO does report a 30% margin of error in the tests.

The effects of the radiation on the rest of the world have been in constant discussion and arguments among government officials and environmental scientists.  One year ago, PBS reported that more than 80 percent of the radioactivity from the damaged reactors ended up in the Pacific, far more than ever reached the ocean from Chernobyl or Three Mile Island.  A small fraction is currently on the seafloor, but the rest was swept up by the Kuroshio current, a western Pacific version of the Gulf Stream, and carried out to sea.  Recently, radioactive contamination has been documented near British Columbia and California.