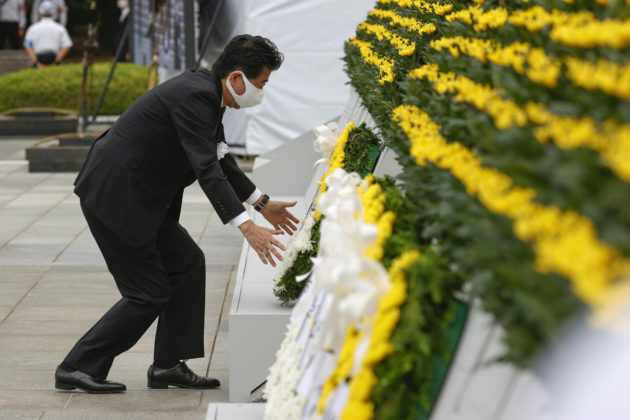 Japan's Prime Minister Shinzo Abe wearing a protective face mask, offers a wreath to the cenotaph for the victims of the 1945 atomic bombing, at Peace Memorial Park in Hiroshima, western Japan, August 6, 2020, on the 75th anniversary of the atomic bombing of the city. Mandatory credit Kyodo/via REUTERS

TOKYO (Reuters) – Bells tolled in Hiroshima on Thursday for the 75th anniversary of the world’s first atomic bombing, with ceremonies downsized due to the coronavirus and the city’s mayor urging nations to reject selfish nationalism and unite to fight all threats.

Though thousands usually pack the Peace Park in the center of the Japanese city to pray, sing and offer paper cranes as a symbol of peace, entrance was sharply limited and only survivors and their families could attend the memorial ceremony.

The city said the significance of the anniversary of the bombing that killed 140,000 people before the end of 1945 had prompted its decision to hold the ceremony despite the spread of the virus, but taking strict precautions.

“On August 6, 1945, a single atomic bomb destroyed our city. Rumor at the time had it that ‘Nothing will grow here for 75 years,'” said mayor Kazumi Matsui.

“And yet, Hiroshima recovered, becoming a symbol of peace.”

At 8:15 a.m. on Aug 6, 1945, U.S. B-29 warplane Enola Gay dropped a bomb nicknamed “Little Boy” and obliterated the city with an estimated population of 350,000, where thousands more died later from injuries and radiation-related illnesses.

On Thursday, as cicadas shrilled in the heavy summer heat and the Peace Bell sounded, the crowd stood to observe a moment of silence at the exact time the bomb exploded.

“When the 1918 flu pandemic attacked a century ago, it took tens of millions of lives and terrorized the world because nations fighting World War I were unable to meet the threat together,” Matsui added.

“A subsequent upsurge in nationalism led to World War Two and the atomic bombings. We must never allow this painful past to repeat itself. Civil society must reject self-centered nationalism and unite against all threats.”

Prime Minister Shinzo Abe attended as usual, but the number of foreign visitors was down. Overall attendance was scaled back to less than a tenth of the usual figure, with chairs spaced far apart and most people wearing masks.

Keiko Ogura, who was eight when the bomb blast knocked her off her feet, has dedicated her life to working for peace.

“The nuclear danger is spreading around the world, and under that mushroom cloud, no one can escape,” she told a recent news conference.

The anniversary was a top trending topic on Japanese Twitter as most users offered prayers for world peace, although one drew a parallel with this week’s huge blast that killed at least 135 in Beirut, the Lebanese capital.

“I really hadn’t been able to imagine it before, but looking at the damage from the Beirut explosion and imagining something several times more powerful, I was struck with a huge sense of fear,” wrote the commenter, identified as “Sato-san.”