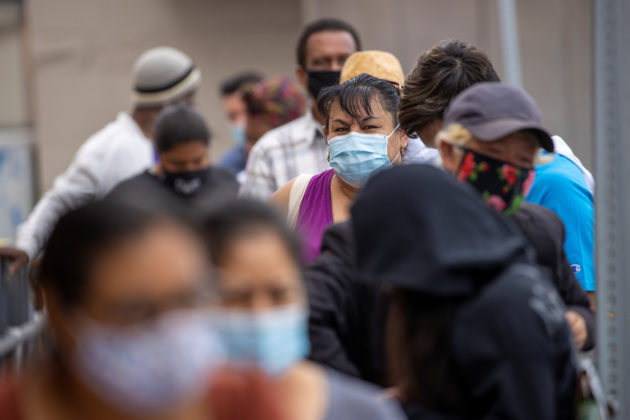 FILE PHOTO: Customers wait in line to shop for food at a Food 4 Less grocery store, during the outbreak of the coronavirus disease (COVID-19), in Los Angeles, California, U.S., August 5, 2020. REUTERS/Mike Blake

WASHINGTON (Reuters) – White House health experts are warning of an uptick in the percentage of people testing positive for COVID-19 in U.S. cities including Boston, Chicago and Washington, urging local leaders to maintain health safety measures to avoid a surge.

“This is a predictor of trouble ahead,” Dr. Anthony Fauci, director of the National Institute of Allergy and Infectious Diseases, said on Thursday.

Fauci was asked on CNN about comments made by his White House coronavirus task force colleague, Dr. Deborah Birx, identifying new areas of concern in major cities, even as authorities see encouraging signs across the South.

Baltimore and Atlanta remain at a “very high level,” as well as Kansas City, Portland, Omaha and California’s Central Valley, Birx told state and local officials in a telephone call Wednesday. A recording of the call was obtained by the journalism nonprofit Center for Public Integrity.

White House data shows small increases in the percentage of positive COVID-10 tests in Chicago, Boston and Detroit and those places need to “get on top of it”, Birx said.

Even in cities and states where most people are doing things right, Fauci said, a segment of people not wearing masks or following social distancing remains vulnerable to infection and can keep the virus smoldering in U.S. communities.

“Unless everybody pulls together, and gets the level way down over baseline, we’re going to continue to see these kind of increases that Dr. Birx was talking about in several of those cities,” Fauci said.

White House coronavirus experts have in recent days sent regular warnings to cities and states not to relax anti-coronavirus measures too much before the virus is under sufficient control.

President Donald Trump, in contrast, has played down the staying power of the virus, saying on Wednesday “it will go away like things go away” as he urged U.S. schools to reopen on time for face-to-face lessons.

Trump also said children are “almost immune” from COVID-19, prompting Facebook Inc on Wednesday to take down a post by the Republican president containing a Fox News video clip in which he made the statement. Facebook said it violated its rules against sharing misinformation about the virus.

Chicago’s mayor said on Wednesday that school would be online-only in September, after the teachers’ union and many parents in the city objected to a plan to allow students the option of attending class twice a week in pods of 15.

Chicago is the third-largest school district in the United States behind New York and Los Angeles, with 350,000 students.

Los Angeles has already announced that students will be kept home, while New York Mayor Bill de Blasio has said he expects to have children attend classes part of the time.