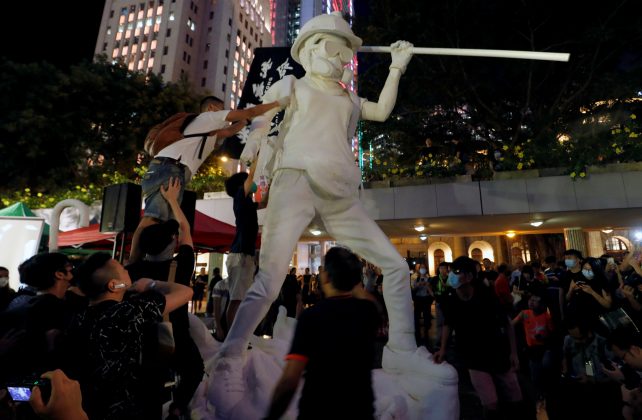 By Marius Zaharia and Jessie Pang

Hundreds of protesters, many of them masked and dressed in black, took cover behind umbrellas and barricades made from street fencing. Some had broken through a metal grill to enter the station where they pulled down signs, broke turnstiles and daubed graffiti on the walls. 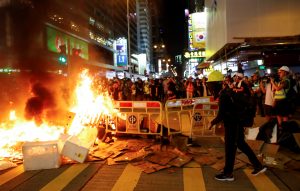 Protestors stand behind a burning barricade during a demonstration in Mong Kok district in Hong Kong, China September 6, 2019. REUTERS/Kai Pfaffenbach

“We’re angry at the police and angry at the government,” said Justin, 23, dressed in black and wearing a hoodie. “Police was very brutal with us at this station. We cannot let them get away with it.”

Protesters had gathered outside Prince Edward station in Mong Kok, one of the world’s most densely populated regions, where police had fired beanbag guns and used pepper spray to clear demonstrators this week.

They withdrew when police fired rubber bullets, but regrouped in smaller pockets to light fires in the street from wooden pallets, cardboard boxes and other debris. Firemen were dousing the flames.

“The police will use appropriate force to conduct a dispersal operation and warn all protesters to stop all illegal acts and leave immediately,” police said in a statement.

There was no immediate official word of arrests or injuries. Both Mong Kok and Prince Edward stations were closed.

Hong Kong leader Carrie Lam announced measures this week to try to restore order in the Chinese-ruled city, including the formal withdrawal of a bill that triggered the demonstrations. The law would have allowed extraditions to mainland China, despite the city having an independent judiciary dating back to British colonial rule.

But the demonstrations, which began in June, had long since morphed into a broader call for more democracy and many protesters have pledged to fight on, calling Lam’s concessions too little, too late.

“No China” was daubed over walls along the key north-south artery of Nathan Road.

“The four actions are aimed at putting one step forward in helping Hong Kong to get out of the dilemma,” Lam told reporters during a trip to China’s southern region of Guangxi. “We can’t stop the violence immediately.”

Apart from withdrawing the bill, she announced three other measures to help ease the crisis, including a dialogue with the people. 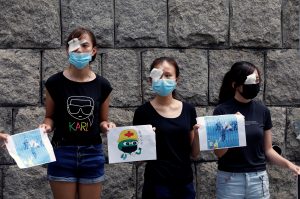 Medical students hold hands as they form a human chain during a protest against the police brutality, at the Faculty of Medicine in The University of Hong Kong, China, September 5, 2019. REUTERS/Anushree Fadnavis

WEEKEND PLANS FOR THE AIRPORT

Demonstrations have at times paralyzed parts of the city, a major Asian financial hub, amid running street battles between protesters and police who have responded with tear gas, pepper spray and water cannons. Violent arrests of protesters, many in metro stations, have drawn international attention.

The crowds were expected to swell into the night, as the city braces for weekend demonstrations aiming to disrupt transport links to the airport.

The airport announced that only passengers with tickets would be allowed to use the Airport Express train service on Saturday, boarding in downtown Hong Kong. The train would not stop en route, on the Kowloon peninsula. Bus services could also be hit, it said.

The measures are aimed at avoiding the chaos of last weekend, when protesters blocked airport approach roads, threw debris on the train track and trashed the MTR subway station in the nearby new town of Tung Chung in running clashes with police.

Fitch said it expects that public discontent is likely to persist despite the concessions to certain protester demands.

“I stressed that the rights and freedoms for (Hong Kong) citizens have to be granted,” Merkel said.

Beijing supported the territory’s government “to end the violence and chaos in accordance with the law, to return to order, which is to safeguard Hong Kong’s long-term prosperity and stability”, Li added.

Hong Kong returned to China in 1997 under the “one country, two systems” formula which guarantees freedoms not enjoyed on the mainland. Many Hong Kong residents fear Beijing is eroding that autonomy.

China denies the accusation of meddling and says Hong Kong is its internal affair. It has denounced the protests, warning of the damage to the economy and the possible use of force to quell the unrest.

In addition to calling for a withdrawal of the extradition bill and the release of those arrested for violence, protesters also want an independent inquiry into perceived police brutality, retraction of the word “riot” to describe rallies and the right for Hong Kong people to choose their own leaders.

The protests have presented Chinese President Xi Jinping with his greatest popular challenge since he came to power in 2012.