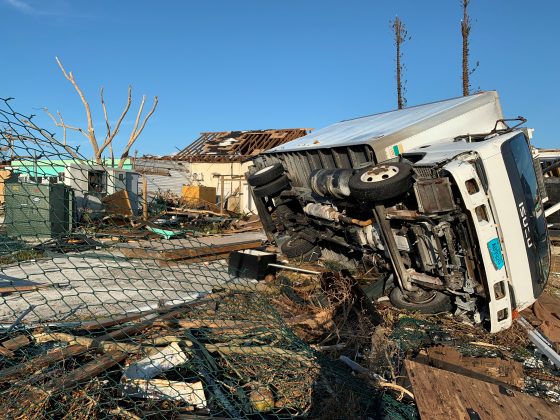 MARSH HARBOUR, Bahamas (Reuters) – The smell of death hangs over parts of Great Abaco Island in the northern Bahamas, where relief workers on Friday sifted through the debris of shattered homes and buildings in a search expected to dramatically drive up the death toll from Hurricane Dorian.

Dorian, the most powerful hurricane to ever hit the Bahamas, swept through the Abaco Islands and Grand Bahama Island earlier this week, leveling entire neighborhoods and knocking out key infrastructure, including airport landing strips and a hospital.

Hundreds, if not thousands, of people are still missing, and officials say the death toll, which currently stands at 30, is likely to shoot up as more bodies are discovered in the ruins and floodwaters left behind by the storm.

“You smell the decomposing bodies as you walk through Marsh Harbour,” said Sandra Sweeting, 37, in an interview amid the wreckage on Great Abaco. “It’s everywhere. There are a lot of people who aren’t going to make it off this island.”

“I work part-time in a funeral home, I know what death smells like,” said Anthony Thompson, 27. “There must be hundreds. Hundreds.”

Asked if any of his friends or family had perished, Thompson looked at the ground.

“I don’t want to ask, because there are people I still haven’t heard from,” he said.

Chaotic conditions around the islands were interfering with flights and boats, hampering relief efforts.

“Obviously, we have to take care of the sick and the injured first, but we’re also making preparations for the dead,” Dr. Caroline Burnett-Garraway, medical chief of staff at Princess Margaret Hospital in Nassau, told CNN by phone.

Many of those injured by the storm, which had been a Category 5 hurricane on the five-step Saffir-Simpson scale of intensity, were being airlifted to the hospital with fractures and head injuries and suffering from trauma and dehydration, said Burnett-Garraway, who expects a “second wave” of patients in the coming days.

With many clinics in the northern Bahamas flooded and unable to receive the injured, relief groups are focusing on getting doctors, nurses and medical supplies into the hardest-hit areas and helping survivors get food and safe drinking water.

The risk of outbreaks of diarrhea and waterborne diseases is high because drinking water may be contaminated with sewage, according to the Pan American Health Organization, which described the situation for some people on Abaco as “desperate.”

The United Nations estimated 70,000 people were in immediate need of food, water and shelter on the islands, where looting of liquor stores and supermarkets has been reported.

The relief effort faces formidable logistical challenges because of the widespread destruction of Dorian, which hovered over the Bahamas for nearly two days with torrential rains and fierce winds that whipped up 12- to 18-foot (3.7- to 5.5-meter) storm surges.

The storm made landfall on the Outer Banks of North Carolina on Friday with winds of 90 miles per hour (150 km/h).

The U.N. World Food Programme said on Thursday it was organizing an airlift from Panama of storage units, generators and prefab offices for two logistics hubs, as well as satellite equipment for emergency responders, and has bought 8 metric tonnes of ready-to-eat meals.

The U.N. agency has allocated $5.4 million to a three-month emergency operation to support 39,000 people, a spokesman said.

Total insured and uninsured losses in the Bahamas amounted to $7 billion, including buildings and business interruptions, according to a preliminary estimate by Karen Clark & Co, a consultancy that provides catastrophic modeling and risk management services.