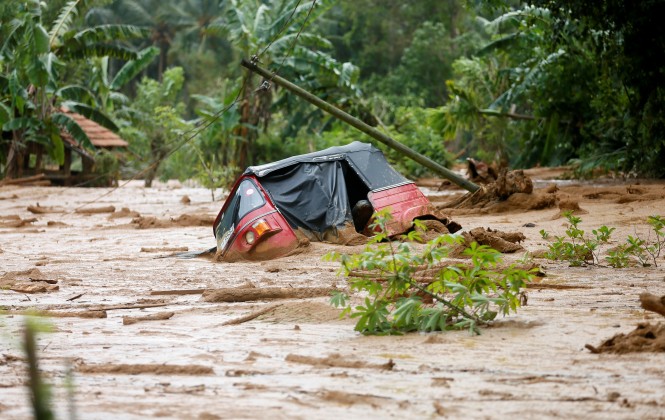 ARANAYAKA, Sri Lanka (Reuters) – Hopes faded on Thursday for the survival of about 130 people trapped under the mud and rubble of two landslides in Sri Lanka, as heavy rain hampered rescue operations and the death toll from the disaster rose to 58.

Days of torrential rains have forced around 300,000 people from their homes across the island nation, official data showed. Thirty bodies have been retrieved at the landslide sites.

That figure is likely to rise sharply as authorities battling muddy conditions begin to give up hope of reaching 132 people believed to be trapped beneath the landslides.

“I don’t think there will be any survivors,” Major General Sudantha Ranasinghe, the officer in charge of the rescue operation, told Reuters.

“There are places where the mud level is up to 30 feet. We will keep going until we can recover the maximum.”

Rescue efforts have focused on the town of Aranayaka, 100 km (60 miles) northeast of the capital, Colombo, where three villages with at least 66 houses were buried late on Tuesday in the central district of Kegalle.

Military officials used hoes and shovels to shift mud as they scrambled to find survivors amid heavy rain that made walking in the hilly terrain difficult.

Material from destroyed homes littered the area, including mud-swathed dog cages and water tanks, while a three-wheeler was seen partially buried.

The military pulled three bodies and parts of another two from rubble at the site of the second landslide that buried 16 people, Ranasinghe said.

H.P. Kamalawathi, 41, said she is still looking for her mother and two elder sisters, who were buried on Tuesday.

“We may get only the dead bodies,” the mother of two said as tears rolled down her cheeks. She and her family had sought safety in a nearly Buddhist temple.

“We can’t take any chance. We will dig and see,” Disaster Management Minister Anura Priyadharshana Yapa told reporters in Colombo after briefing diplomats and international bodies. Sri Lanka is seeking assistance to deal with the worst landslides in its history.

Health officials said they are monitoring for water-borne disease outbreaks while Yapa said the government has sought foreign aid in the form of motors, boats and purifying tablets.

Aid agencies in Colombo canvassed for boats to rescue hundreds of people trapped by rising river waters. Disaster management authorities said around 300,000 people displaced across the country by the disaster had been sent to 610 safe locations.

Troops also used boats and helicopters in rescue operations. The torrential rains since Sunday have caused floods and landslides in nineteen of the country’s 25 districts.

Flooding and drought are cyclical in Sri Lanka, which is battered by a southern monsoon between May and September, while a northeastern monsoon runs from December to February.