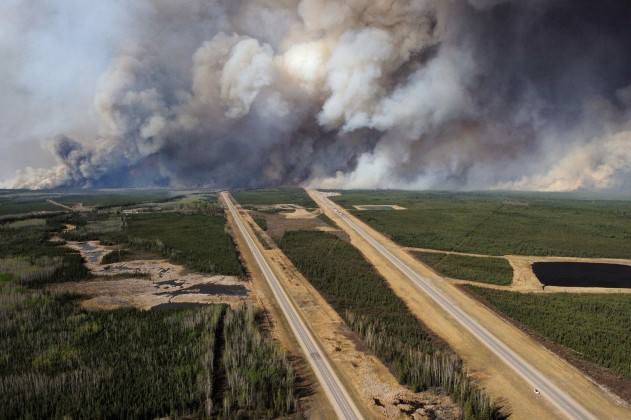 An aerial view of Highway 63 south of Fort McMurray, Alberta. Canada, shows smoke from the wildfires taken from a CH-146 Griffon helicopter May 5, 2016. MCPL VanPutten/Canadian Armed Forces/Handout via Reuters

The fire, which began in early May, forced the evacuation of thousands of workers on Tuesday, prolonging a shutdown that has cut Canadian oil output by a million barrels a day. It destroyed a 665-room lodge for oil sands workers, then blazed eastward toward other camps.

Winds forecast for Wednesday were expected to push the blaze further to the east, putting oil operations in its path, officials said late on Tuesday. Heat and lack of rain also are complicating efforts to control the 355,000-hectare (877,224-acre) fire, which was also stretching toward the Saskatchewan border.

“We expect the fire to spread on the easterly side,” Alberta wildfire manager Chad Morrison said on a Tuesday call.

The latest forecast showed temperatures were expected to reach a high of 24 Celsius (75 Fahrenheit) in the Fort McMurray area on Wednesday, though there was also a 60 percent chance of rain on Thursday.

The wildfire is taking a toll on Alberta’s economy, with one study estimating that the lost oil production will cut the Western Canadian province’s gross domestic product (GDP) by more than C$70 million ($53.91 million) a day.

About 8,000 workers were evacuated from camps and facilities north of Fort McMurray on Tuesday, with both Suncor Energy Inc and Syncrude, majority owned by Suncor, removing all but bare essential staff from their major operations.

None of the oil sands have caught fire, and the industry has redoubled efforts to ensure facilities are well-protected. Officials said facilities have been cleared of vegetation and have lots of gravel on site, reducing the fire risk.

In one encouraging sign for producers, cogeneration electric plants around Fort McMurray increased their output overnight with the restart of Suncor’s Firebag units, the operator of the province’s power grid said on Wednesday.

The roughly 90,000 residents of Fort McMurray are growing frustrated over the lack of an estimate for their return to the oil sands hub, which they were forced to flee about two weeks ago.

Officials told a town hall meeting late on Tuesday that they were narrowing down return dates which they hoped to share “very, very soon,” but added that the city remained unsafe.

(With additional reporting by Julie Gordon in Vancouver, Scott DiSavino in New York and Jeffrey Hodgson and Allison Martell in Toronto; Editing by Paul Simao)