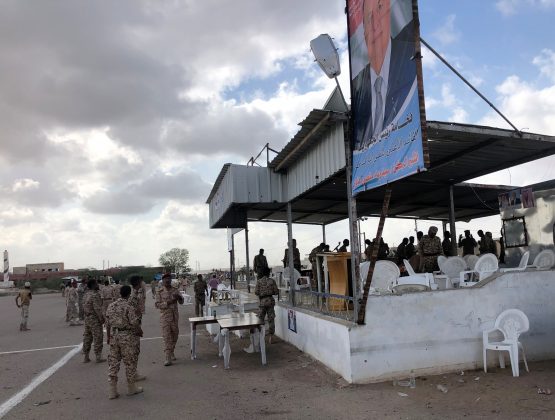 The attack comes as the United Nations tries to get peace talks going between the Houthis who control northern Yemen and the Saudi-backed government of Abd-Rabbu Mansour Hadi by overseeing a limited ceasefire in the Red Sea port city of Hodeidah.

The parade was taking place inside a military base in al-Anad district when an explosion rocked the area, eyewitnesses said. They said high-ranking officers including Yemen’s deputy chief of staff had been wounded.

Saudi-owned Al Arabiya TV said five people had been killed and several injured. Houthi Al-Masirah TV said the attack had been aimed at “the leadership of the invaders”.

A military source said the focus of the attack had been the podium where senior officers were sitting.

It was unclear if officers were present from Saudi Arabia and the United Arab Emirates, leaders of a Sunni Muslim Arab coalition that intervened in Yemen in 2015 to try to restore Hadi’s government, which had been ousted from the capital Sanaa in 2014.

The Houthis said in November they were halting drone and missile attacks on Saudi Arabia, the UAE and their Yemeni allies, but tensions have risen recently over how to implement the U.N.-sponsored deal in Hodeidah.

The Houthis and the Saudi-backed government agreed to stop fighting and withdraw forces at peace talks in Sweden in December following months of diplomacy and Western pressure.

The ceasefire only applies to Hodeidah province but the British ambassador to Yemen, Michael Aron, tweeted on Thursday that an escalation anywhere in Yemen “goes against the spirit of the Stockholm agreement”.

Implementation of the deal, the first breakthrough in peace efforts in five years, has stalled as the sides disagree on who will control the city of Hodeidah after the withdrawal.

Yemen descended into war after pro-democracy unrest forced late former president Ali Abdullah Saleh to step down. Hadi was elected to head a transitional government but after the Houthis took Sanaa he went into exile in Saudi Arabia.

The Houthis deny getting any help from Iran and say they are waging a revolution against corruption.