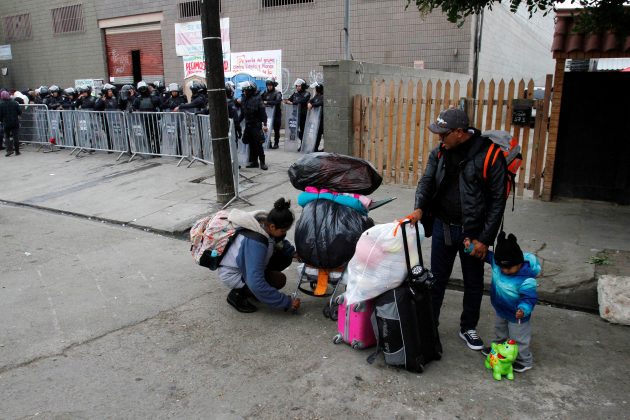 FILE PHOTO: Migrants, part of a caravan of thousands from Central America trying to reach the United States, leave a temporary shelter voluntarily, which is to be closed by Mexican authorities for sanitary reasons, in Tijuana Mexico January 5, 2019. REUTERS/Jorge Duenes

MEXICO CITY (Reuters) – Mexican authorities will meet with Central American officials to prepare for the arrival of a planned new caravan of migrants headed to the United States next week.

The head of Mexico’s immigration office, Tonatiuh Guillen, left on Wednesday on a trip to El Salvador and Honduras to meet with his counterparts and other authorities, said Interior Ministry spokesman Hector Gandini.

Mexico hopes to discourage a mass exodus from El Salvador, Guatemala and Honduras, and wants Central Americans who decide to migrate north to do so in an orderly way and through legal ports of entry.

“The doors to Mexico are open to anyone who wants to enter in an orderly fashion,” Gandini told Reuters in a telephone interview. “But whoever wants to come in illegally will be deported.”

That was intensified by the recent deaths of two migrant children in American custody and a partial U.S. government shutdown over U.S. President Donald Trump’s demand for $5.7 billion in funding for a wall along the border with Mexico.

There are 12 legal ports of entry for Central Americans on Mexico’s southern border, but Mexican authorities have identified an additional 370 illegal points of entry on that frontier, Interior Minister Olga Sanchez said this week.

Mexico borders in the south with Guatemala and Belize.

The illegal entry points will be “monitored and controlled to avoid undocumented access of people to our territory,” Sanchez said.

“In Honduras, they kill us,” read an appeal circulating on social media for people to assemble in the violent Honduran city of San Pedro Sula next Tuesday to start the long trek north to the United States.

While other social media posts invite people to leave from nearby Santa Barbara on Jan. 20, U.S. authorities hoped to dissuade Central Americans from making the journey.

“The risks of illegal immigration are serious. Don’t waste your time and money on a trip destined to fail. The road is long and very dangerous. Thousands of Hondurans who participated in the caravan came back sorry,” Heide Fulton, the U.S charg&eacute; d’affaires to Honduras, said on Twitter on Wednesday.