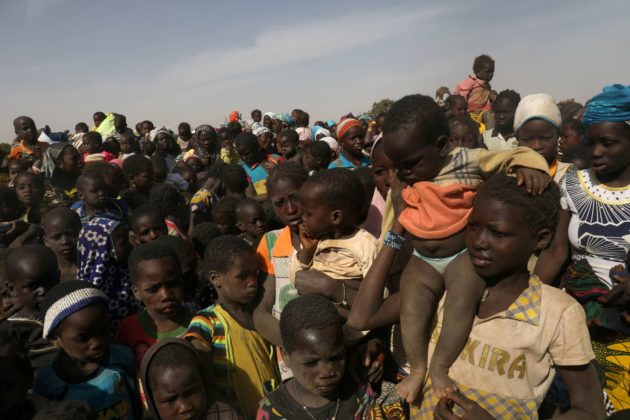 FAUBE, Burkina Faso (Reuters) – When an Islamist preacher took up the fight in Burkina Faso’s northern borderlands almost a decade ago, his only weapon was a radio station. The words he spoke kindled the anger of a frustrated population, and helped turn their homes into a breeding ground for jihad.

Residents of this parched region in the Sahel – a vast band of thorny scrub beneath the Sahara Desert – remember applauding Ibrahim “Malam” Dicko as he denounced his country’s Western-backed government and racketeering police over the airwaves.

“We cheered,” said Adama Kone, a 32-year-old teacher from the town of Djibo near the frontier with Mali, who was one of those thrilled by Dicko’s words. “He understood our anger. He gave the Fulani youth a new confidence.”

Mostly herders, young men like Kone from the Fulani people were feeling hemmed in by more prosperous farmers, whom they felt the government in Ouagadougou favored. The preacher successfully exploited their conflicts over dwindling land and water resources, and the frustrations of people angered by corrupt and ineffective government, to launch the country’s first indigenous jihadi movement. That cleared a path for groups affiliated with al Qaeda and Islamic State.

Since Dicko’s first broadcasts, Burkina Faso has become the focus of a determined jihadi campaign by three of West Africa’s most dangerous armed groups who have carved out influence in nearly a third of the country, while much of the world was focused on the crisis in neighboring Mali. Militant Islamist fighters close schools, gun down Christians in their places of worship and booby-trap corpses to blow up first responders. At least 39 people died last week in an ambush on a convoy ferrying workers from a Canadian-owned mine in the country. There has been no claim for that ambush, but the modus operandi – a bomb attack on military escorts followed by gunmen unleashing bullets – was characteristic of Islamist groups. [nL8N27P0IA]

In 2019, at least 755 people had died through October in violence involving jihadist groups across Burkina Faso, according to Reuters’ analysis of political violence events recorded by the Armed Conflict Location and Event Data Project, an NGO. Actual numbers are likely higher – researchers aren’t always able to identify who is involved in the violence.

The teacher Kone is one of many of Dicko’s former supporters who regret their earlier enthusiasm.

“We handed them the microphones in our mosques,” he said. “By the time we realized what they were up to, it was too late.”

He fled to Ouagadougou two years ago, after armed Islamists showed up at his school. More than 2,000 schools have closed due to the violence, the U.N. children’s fund UNICEF said in August.

A lean, bespectacled Fulani from the north, Malam Dicko broadcast a message of equality and modesty. He reportedly died of an illness in late 2017, but his sermons channeled deep grievances in Burkina Faso’s north where impoverished people have long been frustrated by corrupt officials.

The province of northern Burkina Faso where Dicko lived scores 2.7 on the United Nations Human Development Index, compared with 6 for the area around the capital, Ouagadougou. About 40% of its children are stunted by malnutrition, against only 6% in the capital, according to U.S. AID.

From Ouagadougou to Djibo is a four-hour drive on a road which peters out into a sandy track. Sparse villages dot a landscape of sand and withered trees. Goats devour scrappy patches of grass.

Residents complain that their few interactions with the state tend to be predatory: Bureaucrats demand money to issue title deeds for houses, then never provide the papers; gendarmes charge up to $40 to take down a complaint; there are mysterious taxes and extortion at police roadblocks. Lieutenant Colonel Kanou Coulibaly, a military police squadron commander and head of training for Burkina Faso’s armed forces, acknowledged that northerners “feel marginalized and abandoned by the central government.”

In about 2010 preacher Dicko, who had studied in Saudi Arabia in the 1980s, began tapping this discontent, recalled Kone and other former Djibo residents. He denounced corruption by traditional religious leaders and practices that he deemed un-Islamic, including lavish wedding and naming ceremonies.

The movement he created, Ansarul Islam (Defenders of Islam), opened a path to militants from outside Burkina Faso — particularly Mali.

Early in 2013, French forces were pounding northern Mali to wrest control from al Qaeda-linked fighters who had seized the region the previous year. Dicko slipped over the border to join the militants, said Oumarou Ibrahim, a Sufi preacher who knew Dicko and was close to the No. 2 in his movement, Amadou Boly.

In Mali, Ibrahim said, Dicko linked up with Amadou Koufa, a fellow Fulani whose forces have unleashed turmoil on central Mali in recent years. French forces detained Dicko near the border with Algeria; he was released in 2015.

He set up his own training camp in a forest along the Mali-Burkina border, Kone, the teacher, and Ibrahim, the Sufi preacher, told Reuters.

On the radio that year, he urged youths to back him, “even at the cost of spilling blood.”

For some years Burkina Faso’s president, Blaise Compaore, had managed to keep good relations with Mali’s Islamists. But in 2014, he tried to change the constitution to extend his 27-year-rule. Residents of the capital drove him from office.

Without Compaore, Burkina Faso became a target. Barely two weeks into a new presidency, in January 2016, an attack on the Splendid Hotel and a restaurant in Ouagadougou killed 30 people. It was claimed by al Qaeda-linked militants based in northern Mali.

Dicko became even more radical after that: He fell out with associates including his No. 2, Boly.

Ibrahim, the Sufi preacher, said Boly came to his house in Belhoro village in November 2016, agitated because Dicko had ordered him to raise cash to pay for AK-47 rifles and grenade launchers from Mali.

Boly refused. Dicko threatened him, Ibrahim said. Boly was either with him, “or with the whites and the colonizers.”

Two weeks later, gunmen assassinated Boly outside his Djibo home. Ibrahim said he fled his own village the next day.

The teacher Kone, whose house was down the street, said he heard the gunshots that day. A wave of killings followed. The militants assassinated civil servants, blew up security posts, executed school teachers.

One day in May 2017, Kone was running late for school when he got a phone call from a colleague. Armed men from Dicko’s movement had come and asked after him.

He shuttered the school and sped to Ouagadougou.

Now headed by Dicko’s brother Jafar, Ansarul Islam was sanctioned by the United States in February 2018. None of its leaders could be reached.

It still controls much of Burkina Faso’s northern border areas but two other groups have also built a presence on the country’s borders, according to the European Council on Foreign Relations. Islamic State in the Greater Sahara dominates along the eastern frontier with Niger. And Koufa’s Macina Liberation Front, which is closely aligned to al Qaeda, is active on the western border with Mali.

These spheres of influence can be loose: Fighters for all three are believed to cooperate with each other and with bandit groups.

Their attacks – including the kidnap and killing of a Canadian citizen in January claimed by Islamic State – are becoming more brutal. In one instance in March, a Burkinabe security official told Reuters, militants stitched a bomb inside a corpse and dressed it up in an army uniform, killing two medics – a technique used by Malian fighters.

Recent attacks on churches have killed about 20 people, and a priest was kidnapped in March.

The European Union and member states have committed 8 billion euros ($9 billion) over six years to tackling poverty in the region but so far, responses from Ouagadougou and the West have been predominantly military.

The United Nations has spent a billion dollars a year since 2014 on a 15,000-strong peacekeeping force in Mali. Almost 200 members have been killed – its deadliest mission ever.

France has 4,500 troops stationed across the region. The United States has set up drone bases, held annual training exercises and sent 800 troops to the deserts of Niger. Led by France, Western powers have provided funding and training to a regional counter-terrorism force known as G5 Sahel made up of soldiers from Mali, Niger, Burkina Faso, Chad and Mauritania.

Despite all this, Islamist violence has spread to places previously untouched by it, as tensions like those that first kindled support for Dicko intensify.

“You have a solution that is absolutely militarized to a problem that is absolutely political,” said Rinaldo Depagne, West Africa project director at International Crisis Group, an independent think tank. “The security response is not addressing these problems.”

The fact that a large number of recruits are Fulani has triggered a backlash by other ethnic groups, and those who have fled northern Burkina Faso say they had scant protection.

One woman said gunmen on motorbikes attacked her village, Biguelel, last December. The gunmen accused her family of colluding with “terrorists” simply because they were Fulani. They torched her home and shot her husband and dozens of others dead, but she escaped.

The next day the woman, Mariam Dicko, and about 40 others went to a military police post in the nearby town of Yirgou. “They said it was over now, so they couldn’t help us,” said Dicko – a common surname in the country.

Kanou, the military police commander, acknowledged that troops were sometimes not present when needed. “But when patrols are being attacked, it’s more difficult,” he added. “We have to take measures to protect ourselves.”

As Western forces rely increasingly on their Sahel partners, rights groups and residents say they sometimes overlook abuses by locals. Four witnesses described to Reuters summary executions of suspected insurgents during search operations. These included an incident in the village of Belhoro on Feb. 3, in which security forces ordered nine men out of their homes and shot them dead, according to two women who saw the killings.

New York-based Human Rights Watch documented 19 such incidents in a report in March, during which it says 116 men and boys were captured and killed by security forces. The government said the army is committed to human rights and is investigating the allegations. “In our struggle there will necessarily be innocent victims, not because we want to, but because we are in a tough zone,” Kanou said. U.S. Ambassador Andrew Young said America takes up any “mistakes” with the government.

In November 2018, Burkinabe forces raided the village home of a lab technician at a clinic in Djibo, accusing his 60-year-old father of being a terrorist, two friends of his told Reuters.

They killed the father in front of his son.

The following week, the technician, Jibril Dicko, didn’t show up for work. His phone went dead.

Neighbors said he had gone to join the jihad.

(Additional reporting by Ryan McNeill in London and Thiam Ndaga in Ouagadougou; Edited by Alexandra Zavis and Sara Ledwith)