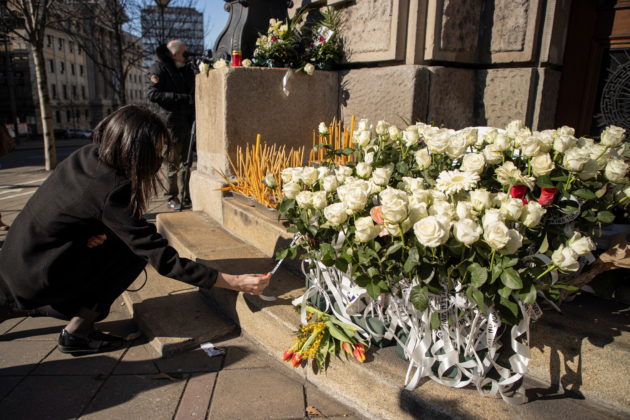 A woman lays a flower and pays her respects to medical workers who have died from the coronavirus disease (COVID-19), during a protest in Belgrade, Serbia, February 15, 2021. REUTERS/Marko Djurica

BELGRADE (Reuters) – Hundreds of people held a minute’s silence in front of Serbia’s government building on Monday to pay their respects to doctors and nurses killed by COVID-19 and to demand more is done to protect health workers.

People placed white roses at the entrance to the building and lit candles.

The Union of Doctors and Pharmacists, which organized the protest, says the death toll among doctors is higher than in other countries in the region.

“For a small country such as Serbia, this is a huge number of people we have lost because of bad organization,” said Ferenci Tot, a respiratory diseases specialist, who was among the protest organizers.

In neighboring Croatia only one doctor has died from COVID-19, in Albania 24 doctors have died and in Bosnia 23 doctors, according to local media reports.

Doctor Dejan Zujovic, a pulmonologist who has worked in COVID-19 red zones in Belgrade, said long working hours and poor protection equipment were the main reasons for such a high death rate among doctors.

“People do not go on holidays, they are exhausted and their immunity suffers,” he said.

Government officials have said they will investigate the deaths of medical workers but little has been done so far.

The head of the government’s Crisis Committee, Predrag Kon, drew public criticism when he said doctors and nurses became infected while having coffee rather than while working with patients.

To prevent further deaths, hours spent in COVID-19 red zones should be limited to six a day, with a one-month time limit on rotas, said Doctor Gorica Djokic, a secretary general of the Union of Doctors and Pharmacists.