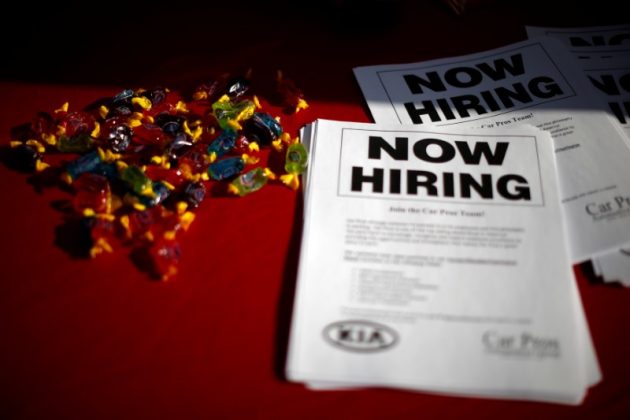 FILE PHOTO: Leaflets lie on a table at a booth at a military veterans' job fair in Carson, California October 3, 2014. REUTERS/Lucy Nicholson/File Photo

WASHINGTON (Reuters) – The number of Americans filing for unemployment benefits jumped to its highest level in more than two years last week amid a surge in applications in hurricane-ravaged Texas, but the underlying trend remained consistent with a firming jobs market.

The surge in claims reported by the Labor Department on Thursday offered an early glimpse of Hurricane Harvey’s impact on the economy. The storm, which unleashed unprecedented flooding in Houston, disrupted oil, natural gas and petrochemical production and forced a temporary closure of refineries.

Economists say Harvey could put a dent in third-quarter gross domestic product, but expect lost output to be recouped in the October-December period.

Initial claims for state unemployment benefits surged 62,000 to a seasonally adjusted 298,000 for the week ended Sept. 2, the highest level since April 2015, the Labor Department said on Thursday. The weekly increase was the largest since November 2012. A Labor Department official said last week’s data had been impacted by Hurricane Harvey.

Unadjusted claims for Texas surged 51,637 last week as some people found themselves temporarily unemployed. That accounted for 95.6 percent of the increase in unadjusted claims last week. Claims for Louisiana were also affected by Harvey, though they only increased 258.

In addition, claims for five states and a territory were estimated last week because of the Labor Day holiday on Monday.

Economists had forecast claims rising to 241,000 in the latest week. The four-week moving average of claims, considered a better measure of labor market trends as it irons out week-to-week volatility, increased by 13,500 to 250,250 last week suggesting the labor market continued to strength.

If, however, the flood disruptions in Texas persist, that could hurt job growth in September. The government reported last week that the economy created 156,000 jobs in August, with the private services sector hiring the smallest number of workers in five months.

Economists largely dismissed the slowdown in job growth, blaming it on a seasonal quirk. Over the past several years, the initial August job count has tended to exhibit a weak bias, with revisions subsequently showing strength.

The dollar was trading lower against a basket of currencies. Prices for U.S. Treasuries rose.

In a second report on Thursday, the Labor Department said worker productivity increased at a 1.5 percent annualized rate in the second quarter, instead of the 0.9 percent pace it reported last month. That followed a 0.1 percent rate of increase in the first quarter.

The government last week revised up second-quarter gross domestic product growth to a 3.0 percent rate from a 2.6 percent pace. Despite the upward revision to productivity, the trend remains weak, suggesting it would be difficult to achieve robust economic growth.

President Donald Trump has vowed to boost annual growth to 3 percent through tax cuts, infrastructure spending and regulatory rollbacks. Compared to the second quarter of 2016, productivity increased at a 1.3 percent rate, instead of the previously reported 1.2 percent pace. That was the strongest performance in two years.

With productivity rising, unit labor costs, the price of labor per single unit of output, increased at only a 0.2 percent pace in the second quarter. Unit labor costs were previously reported to have risen at a 0.6 percent pace. They surged at a 4.8 percent rate in the January-March period.

Compared to the second quarter of 2016, unit labor costs fell at a 0.2 percent rate as previously reported.

Hours worked rose at a rate of 2.5 percent in the April-June period as previously reported. That was the quickest pace since the fourth quarter of 2015, and followed a 1.6 percent rate of increase in the first quarter.

As a result, output per worker surged at a 4.0 percent rate, the fastest since the third quarter of 2014, after rising at a1.8 percent pace at the start of the year.

Output was previously reported to have increased at a 3.4 percent pace in the second quarter.