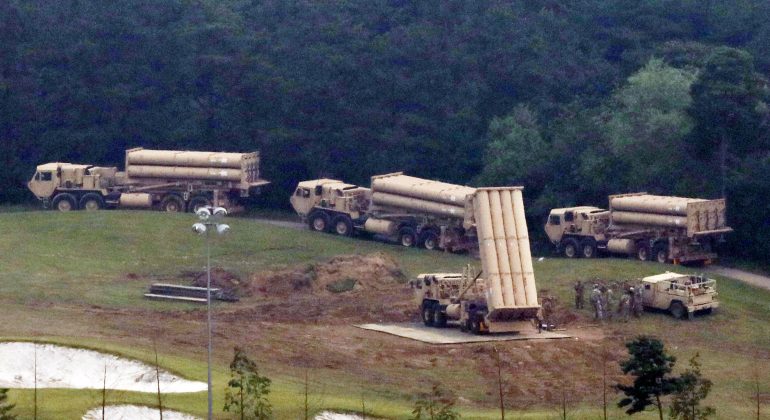 By Christian Shepherd and Katya Golubkova

BEIJING/VLADIVOSTOK, Russia (Reuters) – China agreed on Thursday that the United Nations should take more action against North Korea after its latest nuclear test, while also pushing for dialogue to help resolve the standoff.

North Korea, which is pursuing its nuclear and missile programs in defiance of international condemnation, said it would respond to any new U.N. sanctions and U.S. pressure with “powerful counter measures”, accusing the United States of aiming for war.

The United States wants the U.N. Security Council to impose an oil embargo on North Korea, ban its exports of textiles and the hiring of North Korean laborers abroad, and to subject leader Kim Jong Un to an asset freeze and travel ban, according to a draft resolution seen by Reuters on Wednesday.

Pressure from Washington has ratcheted up since North Korea conducted its sixth and largest nuclear test on Sunday. That test, along with a series of missile launches, showed it was close to achieving its goal of developing a powerful nuclear weapon that could reach the United States.

“Any new actions taken by the international community against the DPRK should serve the purpose of curbing the DPRK’s nuclear and missile programs, while at the same time be conducive to restarting dialogue and consultation,” he said, referring to North Korea by the initials of its official name, the Democratic People’s Republic of Korea.

China is by far North Korea’s biggest trading partner, accounting for 92 percent of two-way trade last year. It also provides hundreds of thousands of tonnes of oil and fuel to the impoverished regime.

U.S. President Donald Trump has urged China to do more to rein in its neighbor, which was typically defiant on Thursday.

“We will respond to the barbaric plotting around sanctions and pressure by the United States with powerful counter measures of our own,” North Korea said in a statement by its delegation to an economic forum in Vladivostok, in Russia’s Far East.

U.S. Treasury Secretary Steve Mnuchin said he had an executive order ready for Trump to sign that would impose sanctions on any country that trades with North Korea, if the United Nations did not put new sanctions on it.

Japanese Prime Minister Shinzo Abe and South Korean President Moon Jae-in spoke at the regional meeting in Vladivostok and agreed to try to persuade China and Russia to cut off oil to North Korea as much as possible, according to South Korean officials.

North Korea accused South Korea and Japan of “dirty politics” for what it said was the highjacking a meeting meant to be about economic development.

Russian President Vladimir Putin said at the meeting he thought the North Korea crisis would not escalate into nuclear war, predicting that common sense would prevail.

But he said he believed North Korea’s leadership feared that any freeze of its nuclear program would be followed by what amounted to “an invitation to the cemetery”.

North Korea says it needs its weapons to protect itself from U.S. aggression.

South Korea and the United States are technically still at war with North Korea after the 1950-53 Korean conflict ended with a truce, not a peace treaty.

China and Russia have advocated a “freeze for freeze” plan, under which the United States and South Korea would stop major military exercises in exchange for North Korea halting its weapons programs.

But neither side appears willing to budge.

Abe later met Putin at the Vladivostok conference and said they both agreed that North Korea’s nuclear test was a serious threat to regional peace and a challenge to global nuclear non-proliferation regime.

Putin said he and Abe decisively condemned North Korea’s launch of a ballistic missile that flew over Japan last week.

More than 30 people were hurt when about 8,000 police broke up a blockade near the site by about 300 villagers and members of civic groups opposed to the THAAD deployment, fire officials said.

The deployment has drawn strong objections from China, which believes the system’s radar could be used to look deeply into its territory and will upset the regional security balance.

South Korean Marines wrapped up a three-day firing drill aimed at protecting islands just south of the border with North Korea, while the air force will finish up a week-long drill on Friday.

For a graphic on nuclear North Korea, click: http://fingfx.thomsonreuters.com/gfx/rngs/NORTHKOREA-MISSILES/010031V7472/index.html