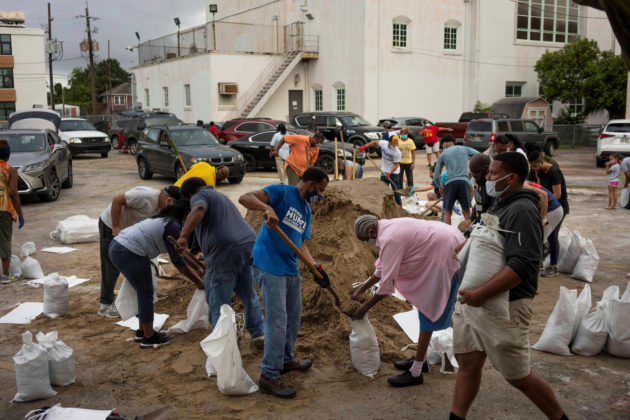 Residents fill sandbags at St. Raymond Church, provided by Mayor LaToya Cantrell and the local government, as hurricane warnings have been issued for part of Louisiana and Texas, in New Orleans, Louisiana, U.S., August 25, 2020. REUTERS/Kathleen Flynn

(Reuters) – Hurricane Laura was bearing down on the U.S. Gulf Coast on Tuesday, threatening fierce winds and storm surge from San Luis Pass, Texas to Ocean Springs, Mississippi and prompting thousands to evacuate before an expected Thursday landfall.

The storm strengthened to a hurricane as its center moved northwest over Cuba early Tuesday at 16 miles per hour (26 kph)with sustained winds of 70 miles per hour (110 kph), and it was due to intensify over the next two days, the National Hurricane Center said.

The Texas city of Galveston imposed a mandatory evacuation order on Tuesday after the storm’s track veered westward overnight towards to the island community of some 50,000 people. The storm was 620 miles (1,000 km) southeast of Galveston on Tuesday morning.

“It’s imperative that you make plans this morning to secure your homes and move you and your family to safety off island,” acting Mayor Craig Brown said in a statement on Tuesday.

More than 330,000 residents living in Jefferson and Orange Counties in eastern Texas were also placed under a mandatory evacuation order on Tuesday.

On Monday, the mayor of Port Arthur, Texas, an oil town of 54,000 people 85 miles (137 km) east of Houston, ordered a mandatory evacuation, giving residents until 6 a.m. on Tuesday to leave.

Laura is projected to make landfall in the Texas-Louisiana border region late Wednesday night or early Thursday morning as a major hurricane, possibly Category 3 on the 5-step Saffir-Simpson scale for measuring hurricane intensity, the NHC said.

“This has the potential to be the strongest hurricane to hit since Hurricane Rita,” Louisiana Governor John Edwards said at a Monday evening news conference, referring to the Category 5 hurricane that hit in 2005.

The storm comes on the heels of Tropical Storm Marco, which weakened sooner than expected and made landfall on Monday in Louisiana before dissipating.

Laura skirted the southern coast of Cuba on Monday but did not cause as much damage as it did in Haiti and the Dominican Republic, where it killed at least 10 people.

The coincidence of Laura’s storm surge with high tide along the Gulf Coast from High Island, Texas to Morgan City, Louisiana could result in water levels rising as high as 11 feet, the Miami-based forecaster said.

Rainfall along the coast near the Texas-Louisiana border, as much as a foot of water in some places, was expected to cause widespread flooding.