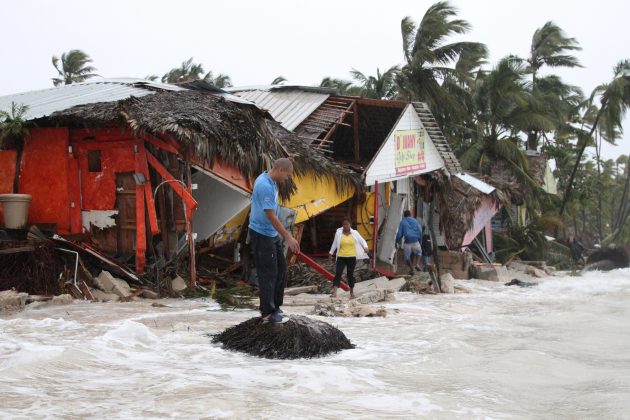 People walk among debris on the seashore in the aftermath of Hurricane Maria in Punta Cana, Dominican Republic, September 21, 2017. REUTERS/Ricardo Rojas

Maria was the second major hurricane to hit the Caribbean this month and the strongest storm to hit the U.S. territory of Puerto Rico in nearly 90 years. It completely knocked out the island’s power and several rivers hit record flood levels.

“We have reports of complete devastation,” Rossello said, adding that the storm’s dangers were not over, as “mudslides and surges, as well as flooding continues.”

Fourteen deaths were reported on the island nation of Dominica, which has a population of about 71,000. Two people were killed in the French territory of Guadeloupe and one in the U.S. Virgin Islands.

Communications outages throughout the region were making it difficult for officials to get a clear picture of damage.

Rossello imposed a dusk-to-dawn curfew through Saturday for the island’s 3.4 million people. He said about 700 people had been rescued from floodwaters and communication was difficult with the southeastern part of the island.

Among those killed in Puerto Rico were eight people who drowned in Toa Baja, about 20 miles (32 km) west of San Juan, Mayor Bernardo Márquez told the newspaper.

Three elderly sisters were killed by a mudslide on Wednesday in the mountainous central municipality of Utuado, El Nuevo Día said, citing relatives and the mayor of Utuado.

U.S. President Donald Trump told reporters the island had been “totally obliterated” and he planned to visit.

Puerto Rico was already facing the largest municipal debt crisis in U.S. history. A team of judges overseeing its bankruptcy has advised involved parties to put legal proceedings on hold indefinitely as the island recovers, said a source familiar with the proceedings.

Maria’s tail end was still bringing drenching rain to Puerto Rico and some parts of the island could have accumulated totals of up to 40 inches (101 cm) from the storm, the NHC said.

Utility crews from the U.S. mainland headed to Puerto Rico to help restore the power grid. The U.S. military sent ground forces and aircraft to assist with search and rescue.

By 8 a.m. (1200 GMT) Friday, Maria was 30 miles (50 km) north-northeast of Grand Turk Island, the U.S. National Hurricane Center said. It was carrying sustained winds of up to 125 miles per hour (205 km per hour), making it a Category 3 hurricane on the five-step Saffir-Simpson scale.

It was expected to bring a storm surge – ocean water pushed inland – of as much as 12 feet (3.7 m) above normal tide levels to parts of the southeastern Bahamas and the Turks and Caicos Islands.

It was expected to lose strength gradually in the next couple of days, and to start curving north-northwestward, the NHC said. Storm swells from Maria would reach parts of the southeastern U.S. coast from Friday, it said.

The storm caused flooding in the Dominican Republic when it passed nearby.

In Dominica, Maria damaged about 95 percent of roofs, the U.N. Office for the Coordination of Humanitarian Affairs said. It struck as a rare Category 5 storm on Monday, obliterating the island’s vital agricultural sector.

Maria passed close by the U.S. Virgin Island of St. Croix, home to about 55,000 people, early on Wednesday, knocking out electricity and most mobile phone service.

“The worst is behind us,” Virgin Islands Governor Kenneth Mapp told reporters on Thursday. The government has imposed a 24-hour curfew until further notice.

About 600 people throughout the U.S. Virgin Islands were in emergency shelters and many parts were without power, Mapp said.

Irma, one of the most powerful Atlantic storms on record, killed at least 84 people in the Caribbean and the United States. It followed Harvey, which killed more than 80 people when it hit Texas in late August and caused flooding in Houston.

More than two months remain in the Atlantic hurricane season, which runs from June 1 to Nov. 30, although the busiest period of storms is generally from mid-August to mid-October.