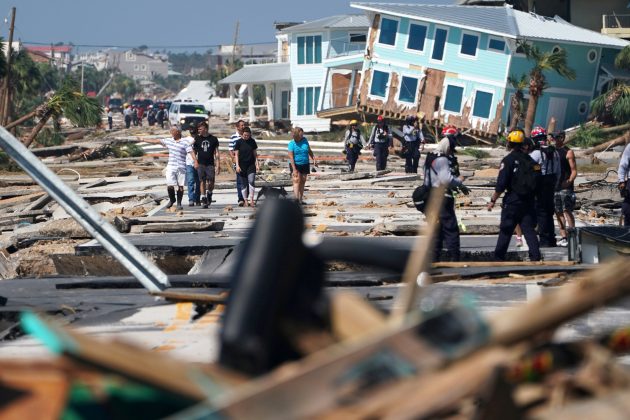 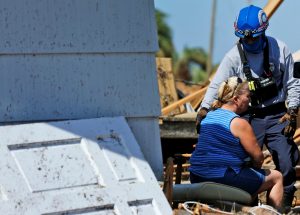 Bianna Kelsay is consoled by member of rescue personnel after being saved from her business damaged by Hurricane Michael in Mexico Beach, Florida, U.S. October 11, 2018. REUTERS/Jonathan Bachman

So far, no counties along the devastated northwest Florida coast have reported deaths related to the storm. That could change, as efforts to assess damage and look for casualties in the worst-hit communities have been hampered by downed utility lines and roads blocked by debris and fallen trees.

“I think you’re going to see it climb,” FEMA Administrator Brock Long said of the death count at a news conference. “We still haven’t gotten into some of the hardest-hit areas.”

Michael charged ashore on Wednesday near the small Florida Panhandle town of Mexico Beach as one of the most powerful storms in U.S. history, with top sustained winds of 155 miles per hour (250 km per hour). It pushed a wall of seawater inland and caused widespread flooding.

Many of the houses in Mexico Beach were reduced to naked concrete foundations or piles of debris. 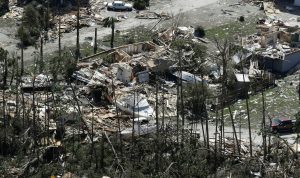 Although weaker as it pushed over the southeastern United States, the storm carried high winds and delivered drenching rains to Georgia, the Carolinas and Virginia. It killed at least 12 people in Florida, Georgia, North Carolina and Virginia, officials said.

In Virginia, the remnants of the hurricane swept away four people in floodwaters. A firefighter also was killed when hit by a truck as he was trying to help an accident victim, the Washington Post reported.

About 1.5 million homes and businesses were without power from Florida to Virginia early on Friday, according to utility companies.

It could be weeks before power is restored to the most damaged parts of Florida, such as Panama City.

Long urged communities such as Mexico Beach, where many homes were obliterated by 12 to 14 feet (3.7 to 4.3 meters) of storm surge, to rebuild to withstand future storms.

“It’s OK if you want to live on the coast or on top of a mountain that sees wildfires or whatever but you have to build to a higher standard,” he said. “If we’re going to rebuild, do it right.”

By early Friday morning the remnants of Michael had moved into the Atlantic Ocean northeast of Norfolk, Virginia, the National Hurricane Center said. 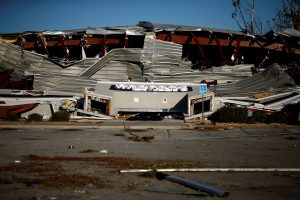 The storm, which came ashore as a Category 4 on the five-step Saffir-Simpson hurricane scale, tore apart entire neighborhoods in the Panhandle.

Many of the injured in Florida were taken to Panama City, 20 miles (32 km) northwest of Mexico Beach.

Gulf Coast Regional Medical Center treated some people but the hospital evacuated 130 patients as it was dealing with its own hurricane effects.

The hospital was running on generators after the storm knocked out power, ripped off part of its roof and smashed windows, according to a spokesman for the hospital’s owner, HCA Healthcare Inc.

Much of downtown Port St. Joe, 12 miles (19 km) east of Mexico Beach, was flooded by Michael, which snapped boats in two and hurled a large ship onto the shore, residents said.

“We had houses that were on one side of the street and now they’re on the other,” said Mayor Bo Patterson, estimating that 1,000 homes were completely or partially destroyed in his town of 3,500 people.

The number of people in emergency shelters was expected to swell to 20,000 across five states by Friday, said Brad Kieserman of the American Red Cross. The Coast Guard reported rescuing 129 people.

Michael also disrupted energy operations in the U.S. Gulf of Mexico as it approached land, cutting crude oil production by more than 40 percent and natural gas output by nearly a third as offshore platforms were evacuated.

It was the third strongest storm on record to hit the continental United States, behind only Hurricane Camille on the Mississippi Gulf Coast in 1969 and the Labor Day hurricane of 1935 in the Florida Keys.