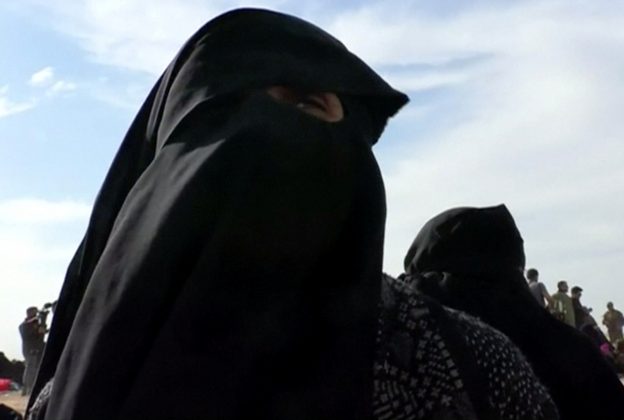 Um Walaa, originally from Morocco with French nationality, and widow of an Islamic state fighter, is seen near Baghouz, Syria in this still image taken from a video shot on March 5, 2019. ReutersTV via REUTERS

NEAR BAGHOUZ, Syria (Reuters) – Emerging from Islamic State’s last enclave in eastern Syria, a widow of one of the group’s fighters made no effort to hide her enmity toward the United States as she handed herself over to U.S.-backed Syrian forces besieging the area.

“This is not war. I did not see fighters, people taking up arms and waging jihad against America. No, I only saw America killing – a lot,” French national Um Walaa’s told Reuters TV after being evacuated from Baghouz near the Iraqi border.

Her words offer a snapshot of the feelings harbored by the followers and fighters of the hardline group who have poured out of the enclave by the thousand over the past month.

After subjecting much of Syria and Iraq to a regime whose distinguishing features included mass killing, sexual enslavement and crucifixion, Islamic State is on the brink of losing its last sliver of populated territory.

Founded in 2014, the group’s self-styled caliphate drew followers from across the world and many, like Um Walaa, remain radicalized, their pride in having become adherents undimmed.

Dressed in black from head to toe and her face covered with a full veil, she said she was a French national of Moroccan origin who was born and raised in Belgium. She said her husband had died fighting for the group.

Um Walaa, who gave birth to her daughter in Syria, said she traveled to Islamic State because she wanted to help. “I wanted to see what there was in Syria. And what I saw was terrorism. America kills a lot of people.”

Islamic State fell back to Baghouz as it gradually lost territory in Syria and Iraq to an array of enemies including Iraqi forces, the Russia- and Iran-backed Syrian army, Turkey-backed rebels and the U.S.-backed Syrian Democratic Forces (SDF).

Its biggest defeats came in 2017 when it was driven from the Iraqi city of Mosul and Syria’s Raqqa.

SDF gains in Syria have been backed by ferocious U.S. airpower. Amnesty International has said there is evidence that attacks by the U.S.-led coalition in Raqqa broke international law by endangering civilians.

The coalition says it has applied “rigorous standards” when identifying Islamic State targets and has taken extraordinary efforts to protect non-combatants.

The defeat of Islamic State at Baghouz will mark a milestone in the campaign against the group, but it is still widely believed to represent a security threat, holding pockets of territory elsewhere and able to launch guerrilla attacks.