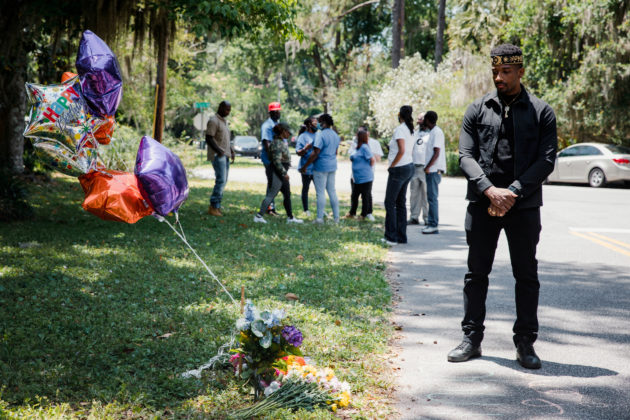 FILE PHOTO: A man stands next to the memorial for Ahmaud Arbery, at the place where he was shot and killed in February after being chased by a white former law enforcement officer and his son, in the Satilla Shores neighborhood, at the Glynn County Courthouse in Brunswick, Georgia, U.S., May 8, 2020. REUTERS/Dustin Chambers/File Photo

ATLANTA (Reuters) – The family of Ahmaud Arbery, the black jogger whose fatal shooting in Georgia triggered a national outcry, appealed on Thursday for any new witness to the killing to step forward after a note reading “I should have stopped them” was found on his memorial.

The single-page note was discovered earlier this week by a television news crew at the memorial, set up in the victim’s hometown of Brunswick, about 300 miles (480 km) southeast of Atlanta.

More two months after the Feb. 23 slaying, a white former law enforcement officer and his son, who were seen on the video chasing the 25-year-old jogger, were arrested last week and charged with aggravated assault and murder.

S. Lee Merritt, an attorney for the Arbery family, said in a statement that the family believes that the person who left the note is a witness to the Feb. 23 shooting.

“They feel great sympathy for the person who wrote that note and would like to speak with them to determine what they knew or what they saw,” the attorney said in a statement.

The shooting was reminiscent of a spate of killings of black men in recent years that involved white police officers or former officers. Outrage over the killings and the response to them by the U.S. criminal justice system led to the formation of the Black Lives Matter movement and national protests.

“Ahmaud – I am so sorry. I should have stopped them. I am so sorry,” the note reads in full. It was posted on the internet by multiple media outlets.

The two suspects, Gregory McMichael, 64, and his son Travis, 34, were arrested and charged on May 7, after the local district attorney asked the Georgia Bureau of Investigation to investigate the case.

Their arrests came just days after the release of the video, which set off the national furor led by civil rights activists and celebrities.

The U.S. Department of Justice has also launched an inquiry on why charges were not brought sooner and whether to charge the suspects with federal hate crimes.

A caravan of protesters plans to drive more than 300 miles from Atlanta to Brunswick on Saturday to draw attention to the case.

(Reporting by Rich McKay in Atlanta; Editing by Dan Grebler)