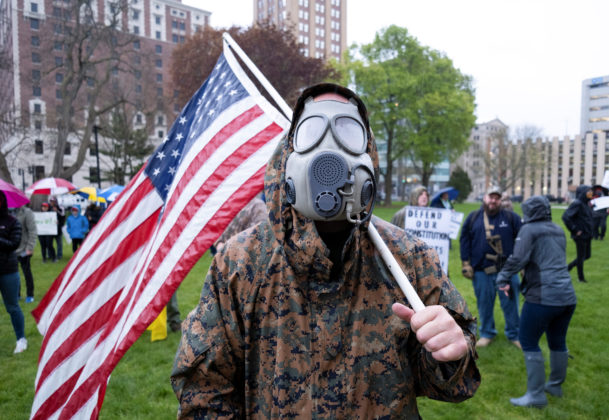 A protester wearing a gas mask holds a U.S. flag during a protest against Governor Gretchen Whitmer's extended stay-at-home orders intended to slow the spread of the coronavirus disease (COVID-19) at the Capitol building in Lansing, Michigan, U.S. May 14, 2020. REUTERS/Seth Herald

By Michael Martina and Seth Herald

DETROIT/LANSING, Mich. (Reuters) – Hundreds gathered to protest Michigan Governor Gretchen Whitmer’s stay-at-home order on Thursday in Lansing, the third but smallest major demonstration at the state’s Capitol since businesses were shuttered in March due to the coronavirus.

Whitmer recently extended Michigan’s stay-at-home order – one of the strictest in the United States – until at least May 28 to prevent the spread of the coronavirus and the respiratory disease it causes, COVID-19.

The protest was organized by Michigan United for Liberty, which says it is a nonprofit with nearly 8,000 members that views the order as unconstitutional.

About 150 protesters gathered in light rain around 9 a.m. near the steps of the Capitol building, but the crowd grew to several hundred by mid-morning, some carrying signs in support of President Donald Trump. A handful had firearms, including long guns.

“Open your business now. Open the restaurants. Open the bars. Open the movie theaters,” one protester, who did not announce his name, told the crowd. “Michigan, wake up America.”

Michigan State Police quickly responded to a small scuffle but said there were no injuries and the site was secure. Speakers had packed up the audio system before 11 a.m., as rain intensified.

The Capitol building was closed because the legislature had been adjourned.

Debate over how and when to ease restrictions on commerce and social life has grown increasingly politicized in the United States, with Trump and his supporters agitating to loosen social-distancing measures more swiftly than medical experts deem prudent.

Democratic governors of states hardest hit by the outbreak have taken a more cautious stance, abiding by public health officials – and guidelines from the White House itself – warning that vastly expanded coronavirus testing and other safeguards be put in place first.

Hundreds of protesters, some armed, gathered at the same site in Lansing on April 30 to protest against Whitmer’s request to the state legislature to extend emergency powers to combat COVID-19.

That rally saw large groups of protesters enter the Capitol building and demand to be let onto the House floor, which is prohibited. Some protesters with guns — which are allowed in the statehouse — went to the Senate gallery.

The Republican-led state legislature has declined to outlaw weapons inside the Capitol building, something Democratic governor Whitmer lamented in an interview on CNN on Wednesday.

“No one should have to go to work and feel intimidated,” she said. “Making the Capitol a gun-free zone is important in making people feel they can do their job safely.”

Authorities had told protesters to expect a heavy police presence at Thursday’s protest, and Michigan Attorney General Dana Nessel warned in advance that she was prepared to prosecute potential violations, including brandishing of weapons and trespassing into the legislative chambers.

“I vehemently support the First Amendment right to protest government actions at the Capitol or elsewhere around the state; however any such activity must be done in a manner that is safe and lawful,” she wrote in a tweet on Wednesday.

Michigan had the fourth highest death toll from COVID-19 in the United States as of Thursday, at 4,714 dead among its 48,391 confirmed cases.

(Reporting by Michael Martina in Detroit and Seth Herald in Lansing; Editing by Rosalba O’Brien)