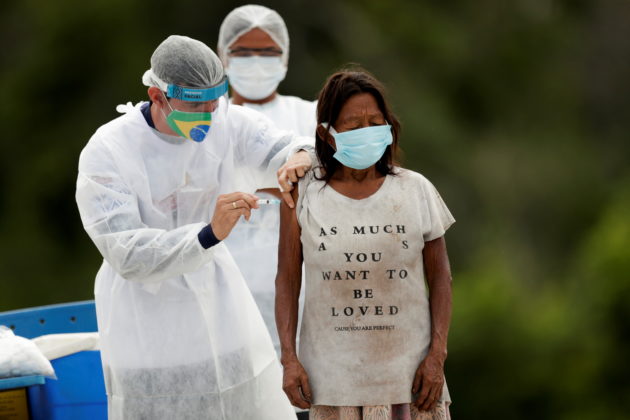 By Leonardo Benassatto and Ueslei Marcelino

The Hupda communities lined up to get their shots.

Traditional medicine prescribed by a shaman is highly respected here, but there was no resistance to receiving the vaccine by China’s Sinovac Biotech.

“We are grateful for the vaccination, so we will not catch the disease,” said Hupda chieftain Jorge Pires in the village of Santo Antanasio, near the Colombian border and a 25-minute helicopter flight from the nearest military outpost.

Following criticism by indigenous leaders that echoed internationally last year that their vulnerable communities were being “decimated” by COVID-19, Brazil’s Health and Defense ministries have mounted a vaccination campaign reaching remote reservations and villages.

According to the service, 50,000 indigenous people have been infected and 589 have died from COVID-19.

That does not include half of Brazil’s 800,000 plus indigenous population not covered by Sesai because they have moved off traditional lands and reservations.

Brazil is battling a COVID-19 outbreak that is worsening, with record deaths reported in the last three days, reaching 1,910 dead in 24 hours on Wednesday. So far, 260,000 people have died and 10.8 million infected, the second-deadliest after the United States.

In the second village of Taracuá Igarapé, there have been no cases of COVID-19 thanks to its isolation, but preventing coronavirus from taking hold is paramount to protecting indigenous communities that live under one roof and cannot practice social distancing.

The challenge of reaching 20,000 indigenous people living in a jungle area the size of Portugal is enormous, and requires helicopter travel, because travel by meandering rivers takes days, said Army Colonel Sylvio Doktorczyk.

“When we talk about Amazonia, everything is superlative, including the difficulties! Particularly the great distances and long rivers,” the colonel heading the mission said.

It was a return visit to the two villages to inoculate those that missed the first dose because they were out hunting or fishing, and to give others their second shot of CoronaVac.

“My people liked to have the vaccine. My community like the vaccine and like when medical people come here,” said Jovino Pinoa, after getting his second shot.