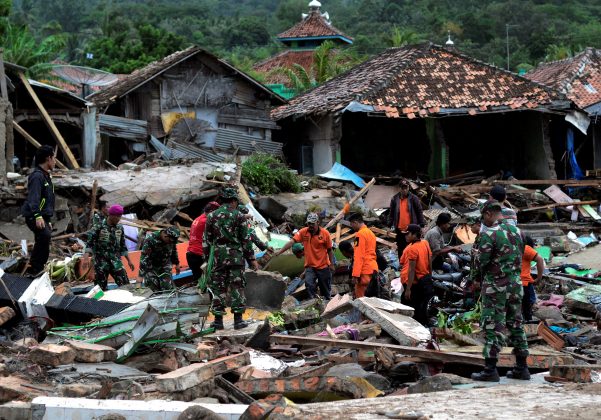 Rescue team members search for victims among debris after a tsunami hit at Rajabasa district in South Lampung, Indonesia, December 23, 2018 in this photo taken by Antara Foto. Antara Foto/Ardiansyah/ via REUTERS

LABUAN, Indonesia (Reuters) – Indonesian military and rescue teams fanned out across a stretch of coastline on Monday, hoping to find survivors of a tsunami triggered by a landslide from a volcano that killed at least 373 people.

Thick clouds of ash spewed from Anak Krakatau, a volcanic island where a crater collapse at high tide late on Saturday set off waves that smashed into coastal areas on both sides of the Sunda Strait between the islands of Sumatra and Java.

Rescuers used heavy machinery and bare hands to dig bodies out of mud and wreckage along a 100 km (60 mile) stretch of Java’s west coast. 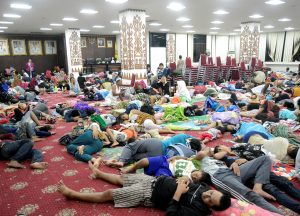 Residents, who lived at coast of Bandar Lampung, rest at government building after they evacuated following a tsunami hit Sunda strait in Lampung, Indonesia, in this December 24, 2018 photo taken by Antara Foto. Antara Foto/Ardiansyah/ via REUTERS

More than 1,400 people were injured, and about 12,000 residents had to move to higher ground, with a high-tide warning extended to Wednesday.

The vast archipelago, which sits on the Pacific “Ring of Fire”, has suffered its worst annual death toll from disasters in more than a decade.

Earthquakes flattened parts of the island of Lombok in July and August, and a double quake-and-tsunami killed more than 2,000 people on a remote part of Sulawesi island in September.

“At least 373 people have died, while 128 people are currently missing,” Sutopo Purwo Nugroho, a spokesman for the disaster mitigation agency, said on Monday evening.

Saturday’s tsunami destroyed more than 700 buildings, from small shops and houses to villas and hotels. It took just 24 minutes after the landslide for waves to hit land, and there was no early warning for those living on the coast. 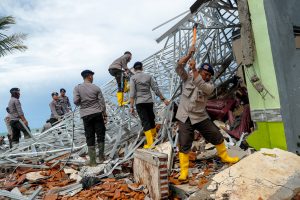 Police officers search for victims among rubble of a destroyed beach front hotel which was hit by a tsunami in Pandeglang, Banten province, Indonesia, December 24, 2018. REUTERS/Jorge Silva

Vehicles were crushed by waves that lifted chunks of metal, felled trees, wooden beams and household items and deposited them on roads and rice fields.

Nurjana, 20, ran uphill after the tsunami hit. Her beachside snack stall was washed away.

“I opened the door straight away and saved myself. I jumped over the wall,” she said. “Everything is destroyed.”

Out in the strait, Anak Krakatau (Child of Krakatau) was still erupting on Sunday night, belching white smoke and ash into the sky.

The meteorology agency that an area of about 64 hectares, or 90 soccer pitches, of the volcanic island had collapsed into the sea.

In 1883, the volcano then known as Krakatoa erupted in one of the biggest blasts in recorded history, killing more than 36,000 people in a series of tsunami, and lowering the global surface temperature by one degree Celsius with its ash. Anak Krakatau is the island that emerged from the area in 1927, and has been growing ever since.

The high waves isolated hundreds of people on Sebesi island, about 12 km from the volcano.

“We are completely paralyzed,” Syamsiar, a village secretary on the island, told Metro TV, calling for food and medicine.

President Joko Widodo, who is running for re-election in April, told disaster agencies to install early warning systems, but experts said that, unlike with tsunami caused by earthquakes, little could have been done to alert people that waves were coming.

“Tsunamis from volcanic flank collapse are generated right at the coast and often close to populations,” said Eddie Dempsey, lecturer in structural geology at Britain’s University of Hull.

“The interval between the volcanic collapse and the arrival of the waves is minimal.”

The timing of the disaster over the Christmas season evoked memories of the Indian Ocean tsunami triggered by an earthquake on Dec. 26, 2004, which killed 226,000 people in 14 countries, including more than 120,000 in Indonesia.

Families streamed out of the area on Monday for fear of further tsunami, jamming roads already blocked by debris.

Fishermen told how a light breeze was followed by a huge wave that smashed together wooden fishing boats moored off the coast and pulled down the trees they were tied to.

Excavators were being used to move debris including piles of steel roofing tangled like spaghetti. Medics were sent in with the military, while groups of police and soldiers reached remote areas.

One team used sniffer dogs to search for survivors at the beach club where a tsunami washed away an outdoor stage where the Indonesian rock band Seventeen were performing at a party for about 200 guests. They had already pulled out nine bodies that day.

At a village 20 km away, district chief Atmadja Suhara said he was helping to care for 4,000 refugees, many of them now homeless.

“Everybody is still in a state of panic,” he said. “We often have disasters, but not as bad as this.”