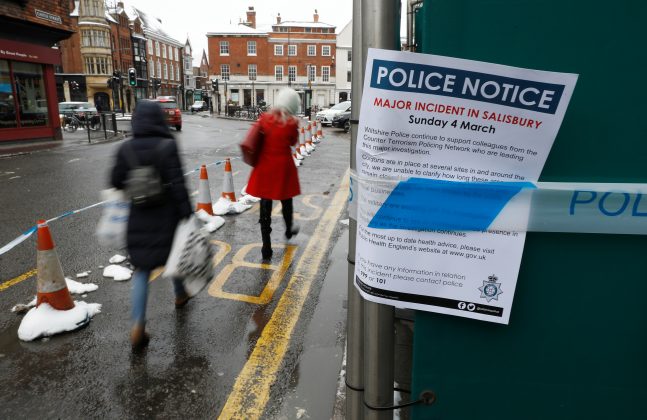 A police notice is attached to screening surrounding a restaurant which was visited by former Russian intelligence officer Sergei Skripal and his daughter Yulia before they were found on a park bench after being poisoned in Salisbury, Britain, March 19, 2018. REUTERS/Peter Nicholls

By Alex Fraser and Peter Nicholls

SALISBURY, England (Reuters) – Inspectors from the world’s chemical weapons watchdog on Monday began examining the poison used to strike down a former Russian double agent in England, in an attack that London blames on Moscow.

Britain says Sergei Skripal and his daughter, who are critically ill in hospital, were targeted with the Soviet-era military-grade nerve agent Novichok. It accuses Moscow of stockpiling the toxin and investigating how to use it in assassinations.

Russian President Vladimir Putin, who easily won another six-year term on Sunday, said the claims were nonsense and that Russia had destroyed all its chemical weapons. While the Kremlin told Britain to back up its assertions or apologize, Britain’s fellow EU members offered it “unqualified solidarity”.

Skripal, a former colonel in Russian military intelligence who betrayed dozens of Russian agents to Britain, was found collapsed along with his daughter on a bench in the small southern city of Salisbury two weeks ago.

The identification of Novichok as the weapon has become the central pillar of Britain’s case for Russia’s culpability. Each has expelled 23 of the other’s diplomats as their relations have sunk to a post-Cold War low.

On Monday, inspectors from the Organization for the Prohibition of Chemical Weapons (OPCW) began running independent tests on samples taken from Salisbury to verify the British analysis, said an OPCW source speaking on condition of anonymity.

“The team from The Hague will meet with officials from the Defence Science and Technology Laboratory and the police to discuss the process for collecting samples, including environmental ones,” Britain’s Foreign Office said. 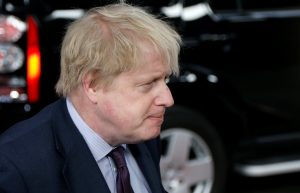 “This is a classic Russian strategy of trying to conceal the needle of truth in a haystack of lies and obfuscation. They’re not fooling anybody any more,” Johnson told reporters.

“There is scarcely a country around the table here in Brussels that has not been affected in recent years by some kind of malign or disruptive Russian behavior.”

EU diplomats cautioned there was no immediate prospect of fresh economic sanctions on Russia, but the assembled EU foreign ministers did offer strong verbal support.

“The European Union takes extremely seriously the UK government’s assessment that it is highly likely that the Russian Federation is responsible,” said their statement.

They said using a nerve agent for the first time on European soil for 70 years would be a clear violation of the Chemical Weapons Convention, which the OPCW safeguards, and that it represented a “security threat to us all”.

(Reporting by Anthony Deutsch in Amsterdam and Robin Emmott and Alistair MacDonald in Brussels; Writing by Michael Holden; editing by Guy Faulconbridge and Kevin Liffey)