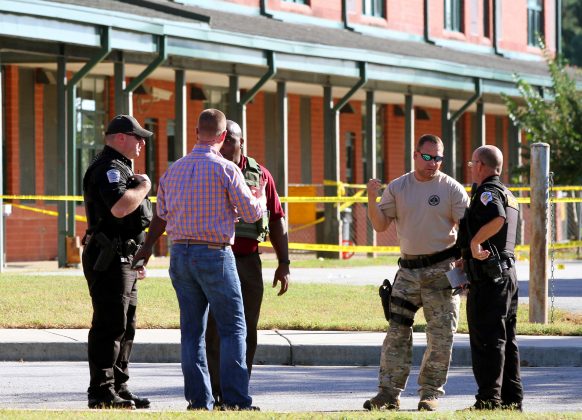 CHARLESTON, S.C. (Reuters) – Investigators were searching on Thursday for the motive behind a shooting spree by a South Carolina teenager who killed his father and wounded two school students and a teacher before being pinned down by a volunteer fireman.

The incident was the latest in a series of shootings at U.S. schools that has fueled debate about access to guns in America.

The 14-year-old boy, whose name has not been released, shot and killed his father, Jeffrey DeWitt Osborne, 47, on Wednesday afternoon.

Then he drove to Townville Elementary School, where he shot two boys and a woman teacher with a handgun, before being subdued by the volunteer firefighter, police said.

Authorities said they were checking if there was a connection between the gunman and the school victims, but had ruled out terrorism and ethnicity as motivating factors.

The suspect was in custody and interviewed by investigators on Wednesday night, Anderson County Sheriff John Skipper told a news conference.

“We are in the process of taking him through the legal process,” he added.

Authorities said the suspect was home-schooled and called his grandmother, who went to his home and found his father.

“She could not make out what he was saying because he was crying and upset, and so they went to the house, and that’s when she discovered her son and called 911,” coroner Greg Shore told the news conference.

Next, the boy drove a pickup truck about 2 miles (3.2 km) to the school, and crashed into a fence around the playground before shooting the other three victims, police said.

One boy, Jacob Hall, 6, was shot in the leg, police said. He is in critical condition, Greenville Health System spokeswoman Sandy Dees said.

Both were treated and released from hospital, said Ross Norton, a spokesman for AnMed Health Medical Center.

Brock, a 30-year veteran of the Townville Volunteer Fire Department, was hailed on social media as a hero and credited with preventing another school massacre.

Police arrived within minutes of a 911 call to take the suspect into custody. He never entered the school building, said Chief Deputy Keith Smith.

About 280 students attend the school in Anderson County, near the Georgia state line about 100 miles (160 km) northeast of Atlanta. It will stay shut on Thursday and Friday as authorities investigate.

U.S. schools have beefed up security precautions since 2012, when a gunman shot and killed 20 children and six educators at Sandy Hook Elementary School in Newtown, Connecticut.

Immediately after the shooting, armed officers guarded the students as they traveled by bus from the school to a nearby church, media said. Television images showed police swarming the school, with some officers on the roof.

Wednesday’s events follow a Texas incident this month in which a 14-year-old girl shot and wounded a fellow student before dying of a self-inflicted gunshot wound.