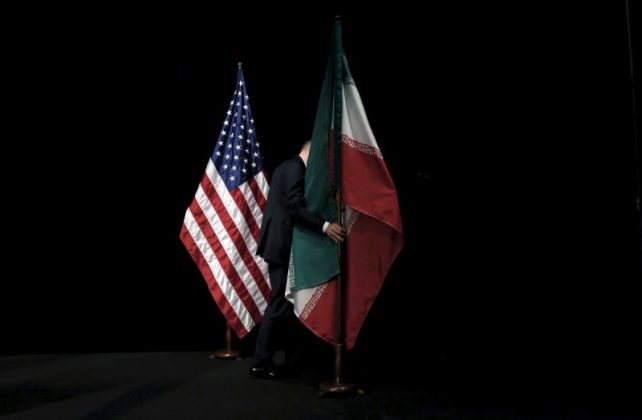 A staff member removes the Iranian flag from the stage during the Iran nuclear talks in Vienna, Austria July 14, 2015. REUTERS/Carlos Barria

The statement by Ayatollah Sadeq Larijani capped a week of heightened rhetoric over the jailing and disappearance of Americans in Iran and new U.S. sanctions against the Islamic Republic.

“We tell them: ‘You should immediately release Iranian citizens held in American prisons in violation of international rules and based on baseless charges’,” Larijani said in remarks carried by state television.

“You have seized the property of the Islamic Republic of Iran in violation of all rules and in a form of open piracy, and these should be released.”

On Friday, U.S. President Donald Trump urged Tehran to return Robert Levinson, an American former law enforcement officer who disappeared in Iran more than a decade ago, and release businessman Siamak Namazi and his father Baquer, jailed on espionage charges.

Trump said Iran would face “new and serious consequences” if the three men were not released. U.S. authorities imposed new economic sanctions on Iran on Tuesday over its ballistic missile program.

Earlier this month, Iran said another U.S. citizen, Xiyue Wang, a graduate student from Princeton University, had been sentenced to 10 years in jail for spying.

According to former prisoners, families of current ones and diplomats, Iran sometimes holds on to detainees for use for prisoner exchanges with Western countries. Tehran has denied this.

In a swap deal in 2016, Iranians held or charged in the United States, mostly for sanctions violations, were released in return for Americans imprisoned in Iran.

Also that year, Iran filed an International Court of Justice complaint to recover $2 billion in frozen assets that the U.S. Supreme Court had ruled must be turned over to American families of people killed in bombings and other attacks blamed on Iran.